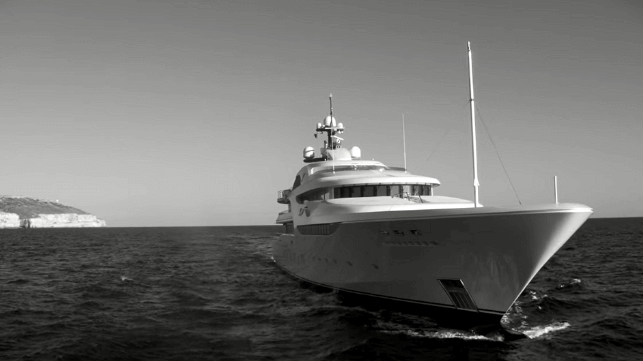 The hackers moved the reported AIS position of the yacht Gracious at Snake Island, a small but strategic Ukrainian outpost that was seized by Russian forces last week. The group also changed the yacht’s call sign to “Anonymo”, and its new destination is not printable.

the Gracious The current position is in the Baltic Sea, on the other side of the European continent. Shortly before the invasion, she moved from a shipyard in Hamburg to the Russian Baltic Sea enclave of Kaliningrad, where she cannot be reached by international sanctions.

Gracious is an 82 meter superyacht built by the Russian shipyard Sevmash and fitted out by a renowned German shipbuilder. With three upper decks, the steel and aluminum vessel has spacious accommodations for 12 guests and 14 crew. Boat International reports that her interior finish includes “tooled leather, tapestry walls, marquetry, marble, stainless steel, ebony and untreated teak.”

In a statement, the hacking group said its actions were not aimed at the Russian people, but at the government bodies that enabled the invasion of Ukraine. “The operation targets Putin and the Putin-controlled state apparatus, state-owned enterprises, state-controlled media, as well as private individuals and businesses who have benefited from Putin’s autocratic system for decades,” wrote the group.

Anonymous claims to have taken down more than 300 Russian media and bank websites since February 25. On Monday, he also hacked into the homepages of several Russian state media websites to display an anti-war message, allegedly written by Russian journalists.

“We have been isolated from the whole world, they have stopped buying oil and gas. In a few years we will live like North Korea,” said a message, posted briefly on the homepages of CASS, Kommersant and Izvestia. “What’s the point? So Putin can go down in the history books? This isn’t our war, let’s stop him!”