Find out how Barbados, the world’s newest republic, severed ties with the UK 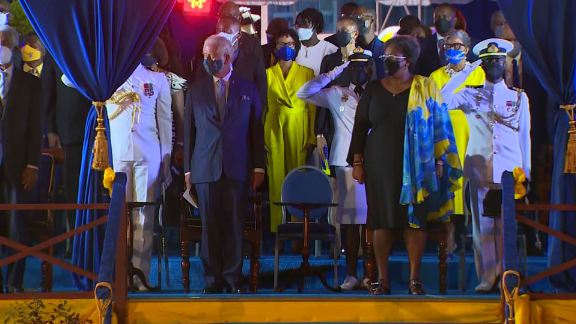 At the stroke of midnight, Barbados severed its last links with the British monarchy after nearly 400 years. In a ceremony Monday night, Prince Charles acknowledged the “appalling atrocity of slavery” as the nation deposed Queen Elizabeth II as head of state and inaugurated its first-ever president.

The official festivities marking the island’s historic transition from kingdom to republic took place in National Heroes’ Square, decorated in the national gold and overseas colors, in the heart of the capital city of Bridgetown.

The heir to the British throne had come from London for the occasion and watched the Royal Standard flag lowered from the mast and the new Presidential Standard hoisted in its place.

Moments later, the Queen’s former Representative Governor General Sandra Mason – a highly respected 73-year-old former lawyer – was sworn in as President by the Chief Justice. It had been exactly 55 years to the day that Barbados had declared independence from Great Britain.

“Having a clear idea of ​​who we are and what we are capable of achieving, in 2021 we are now turning the bow of our ship towards the new republic. We do it so that we can grasp the full substance of our sovereignty, ”Mason said in his first speech as president.

“For decades we have had speeches and debates about Barbados’ transition to a republic. Today the debate and speech has become actions. Today we have set our compass in a new direction . “

After delivering a 21-gun salute to mark the historic change, Mason bestowed the country’s highest honor, the Order of Liberty, on the Prince of Wales – a move designed to underscore the close and continuing relationship between the Barbados and the United Kingdom. .

Reflection on the transatlantic slave trade

Prince Charles said he was “deeply touched” to have been invited to participate in the commemorations before reflecting on the protracted process the island nation of just under 300,000 people endured to become a republic.

He told the people of Barbados: “The creation of this Republic offers a new beginning, but it also marks a point on a continuum – a milestone on the long road that you have not only traveled, but built.”

“From the darkest days of our past and the appalling atrocity of slavery, which forever sullies our history, the people of this island have forged their way with extraordinary strength. Emancipation, self-government and independence were your crossing points, freedom, justice and self-determination were your guides, ”he said.

“Your long journey has brought you to this moment, not as your destination, but as a vantage point from which to examine a new horizon.”

Barbados’ decision marks the first time in nearly three decades that a kingdom has chosen to remove the British monarch from his post as head of state. The last nation to do so was Mauritius in 1992. Like that country, Barbados intends to remain in the Commonwealth, a 54-member organization made up mostly of former British territories, designed to foster cooperation. and international trade.

Charles, who arrived late Sunday as Prime Minister Mia Amor Mottley’s guest of honor at the transition ceremony also spoke of his long relationship with the nation, following his first visit five decades ago. He was interrupted by cheers after saying he would always consider himself a friend of Barbados.

“Tonight you are writing the next chapter in the history of your nation, adding to the treasure trove of past achievements, collective enterprise and personal courage that already fill its pages,” he said in concluding his remarks. .

“Yours is a story in which every Barbadian, young and old, can take the greatest pride – inspired by what came before and confident in what lies ahead.”

The vibrant celebratory ceremony also featured Barbadian music and dance, but a highlight for many would have been when singer Rihanna became a national hero. A huge roar of celebration erupted at the announcement. Prime Minister Mottley told the star: “May you continue to shine like a diamond and bring honor to your nation by your works, by your actions” – a reference to the 2021 pop star’s hit song “Diamonds “.

The prince’s remarks were the furthest the UK has gone on regarding slavery, but ended before a formal apology.

Some in Bridgetown have questioned why the Queen’s son came, pointing out that the island’s historic relationship with the Crown was rooted in slavery.

“No member of the royal family should participate in our great freedom day,” activist David Denny told CNN.

“The royal family benefited financially from slavery and many of our African brothers and sisters have died fighting for change,” added Denny, secretary general of the Caribbean Peace and Integration Movement.

An expedition for King James I of England claimed Barbados when his ships first arrived on its shores in 1625. A colony was established two years later.

“It was the first laboratory of English colonialism in the tropics,” Richard Drayton, professor of imperial and world history at Kings College London, told CNN.

“Barbados also provided an important source of private wealth in 17th and 18th century England,” he added, noting that many English families made substantial fortunes from sugar and slavery.

Citing this story, Denny described Prince Charles’ involvement as “an insult to our people” and called for financial reparations from the royal family, as well as the UK government and other institutions that profited from the transport. of people from Africa and their enslavement in plantations across the Caribbean.

Scott Furssedonn-Wood, British High Commissioner to Barbados told CNN: “It is clear that people in Africa, in this region, in all parts of the world still feel this deep sense of injustice and it is all too just make us recognize that, that we are determined such a thing could never happen again. “

Denny said George Floyd’s death in Minneapolis last year “created awareness across the world” and sparked protests of solidarity on the island. A result of the protests: An empty plinth now sits in Bridgetown’s main square, where a bronze statue of British Admiral Lord Horatio Nelson – a defender of the island’s slave trade once stood.

A stone’s throw from the ceremony site in Swan Street, a popular shopping district for residents of downtown Bridgetown, many Barbadians have also welcomed the change.

Roger Goodridge, a 59-year-old toy salesman, described the move to a republic as “a long time ahead” and said he was not surprised by Charles’ visit.

“The time is over for ‘Little England’. We are now on our own and on our greatest success – breaking the waters and moving on to another stage of our lives.”

Victoria Norvill, a 16-year-old student enjoying the holidays with a few friends, told CNN: “I feel very good that Barbados is becoming a republic because we are becoming free and independent.”

Others expressed support, but wondered if the transition had not been “a little too quick”. The government created its 10-member group to help manage the transition from a monarchical system to a republic in May of this year.

“It’s too rushed. Not everyone has thought of it yet and there are so many people who don’t even know what a republic is,” said Andre Moore, 36.

“I think they should have taken at least a whole year to deal with this or at least two years. I think two years to really think about it, agree on what they have prepared for any. this republic story. “

Barbados has separated from Queen, but she remains head of state in 15 countries. Republican movements in those countries will undoubtedly watch the token handover and hope it will add to the momentum of their own campaigns.

Sandy Biar said the 95-year-old ruler has always said that it is up to each nation to decide if and when it leaves the monarchy.

“Barbados shows that this can be done while maintaining a friendly relationship with the British monarchy and the United Kingdom,” she added.