Elixir: the new boutique cruise line that gives the impression of being on a private yacht | Travel

DDon’t you think we’re a bit young for a cruise? my boyfriend said when I pitched the idea a few months ago. Cruising is a bit of a pot: either you’re a mega fan or the thought makes your toes curl. But to me, it seemed like the perfect way to explore Greece – a country with nearly 10,000 miles of coastline where tourists tend to congregate around the usual spots, such as Santorini and Corfu.

And there are a lot more tourists than usual. Greece has rebounded from Covid, overtaking Italy to become the second most popular holiday destination after Spain, with almost four million Britons visiting each year. Good news for the Greek economy, but bad news for the rest of us. Venture further away for something a little more “authentic” often requires MI6 levels of random ferry planning and navigation.

But it’s doable if you have someone else to do the planning, which is where cruising comes in. Especially since instead of choosing a 3,000-passenger ship, we opt for a boutique cruise from new line Elixir, which – with a maximum of 48 passengers – promises to be more like a private yacht charter, without the five-figure price tag.

My reservations about the cruise are pushed to the back of my mind as I board Elixir’s brave blue and white Elysium at the port of Lavrio in Athens. We learn that – like Ulysses – our trip was deflected by the seasonal meltemi winds that hit the Aegean Sea in summer. This means that instead of a week-long trip around the Cyclades islands, we head west to circumnavigate the Peloponnese.

The deck has plenty of room for dining and lounging

Our cruise’s 25 passengers gather in the cream lounge of the Elysium for an introduction by the ship’s chief steward, Marco, who tells those disappointed by the change in itinerary that: “If we go to the Cyclades , y’all would vomit in your cubicles” – which seems to do the trick. Before the ice has melted in our welcome cocktail, we cut through the waves en route to Hydra, an island adored by Leonard Cohen, Henry Miller and Patrick Leigh Fermor.

Elysium is the first ship in the Elixir fleet, which was founded by industry veteran Ioannis Terdimos and his estranged wife, Manya Louvari; he made his first summer sails this year. Terdimos bought the ship at the height of the Covid pandemic, when the industry’s reputation was on stormy seas and cruise ships were likened to floating petri dishes.

“Our friends thought we were crazy, but for me the timing was perfect,” Terdimos told me from his usual seat on the Elysium terrace. Because the industry had stalled, he was able to negotiate an incredibly good price for the ship, previously used by Celebrity Cruises to sail the Galapagos Islands. He and Louvari then shelled out a six-figure sum to improve it. “I spent many years in the cruise industry, observing all the mistakes made by different companies,” says Terdimos. “Things like waking up in the morning and having an early breakfast until 9 a.m. and having to eat it in the ship’s dining room. Here you can grab a plate and eat anywhere – when I’m on vacation, I don’t want pressure.

There’s nothing tacky or glitzy that you might associate with cruising. The vibe is youthful and relaxed — staff wear puffy T-shirts, Birkenstock sandals, and harem pants; some have tattoos and piercings. Staff captain Marianthi Kasdagli was already a celebrity in her own right and now shares photos and videos of life at Elysium with her 100,000 Instagram followers.

Dusk falls and Hydra appears, its pastel-colored houses cascading down to the harbor. Bites of moussaka are dropped into the dining room as we all run to watch the sun set behind the superyachts. We disembark just in time for an ice cream and a potter’s around the arty old town, where I stumble upon an open-air cinema nestled between the houses – I promise to come back and see a film there one day.

I take the cruising lifestyle like a duck to water. There’s yoga on deck at 8:30 (balancing in tree pose is much trickier on a moving ship), followed by breakfast and then a daily swim stop. There is even a spa. One day, I return to the boat to be served charred octopus and a glass of ouzo. Lunch consists of salads and grilled meats, eaten in the shade on the deck. It certainly feels like a private yacht, with mostly couples and a group of friends on board – we’re not even the youngest.

We anchor in small bays that large cruise ships cannot access, home to lonely bars with young waiters eager to practice their English. Some days, we have lunch on land in a café: salad topped with a slab of feta cheese, accompanied by a cold Mythos lager.

Pilates is at 5:00 p.m., then there is just enough time for a cocktail before arriving at the port for dinner. Another plus: it’s not all-inclusive, which means you can be flexible about where you eat. Some guests crave fancy spots, but we’re happiest with a plate of fried fish and a carafe of local wine at a friendly harborside taverna that will give you change from €50.

Cabins are spacious, with wood paneling and airy blue and white interiors ubiquitous in Greece. My boyfriend and I have a lot of fun rolling up the shade each morning to see the surf pass by our window, wondering where we woke up. We play sea shanties on our phones and bounce up and down – even big kids love being on the water. 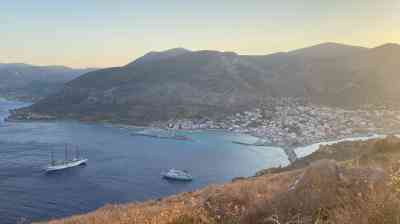 Seeing the medieval walled town of Monemvasia in Laconia appear one evening is like stumbling upon a Hollywood blockbuster movie set. Founded in the 6th century, followed by a period of ping pong between the Venetians and the Ottomans, it is one of the oldest continuously inhabited cities in Europe, on an island, accessible via a small bridge from the mainland . The lower town is a maze of streets full of Byzantine churches and medieval ruins, and a path leads to the old upper town. We pass the foundations of ancient houses, the air heavy with the smell of sap and pine cones clattering our way, then on to the acropolis for sweeping views of the bay and mountains covered with Peloponnese scrub.

Other highlights include seeing dolphins playing alongside the ship in the Bay of Corinth and a stop at the buttercream-colored sandy dunes of Elafonisos to splash around in the shallow waters. We wouldn’t otherwise have visited Pylos and Gytheio, where we take a taxi to the ghostly shipwreck of Dimitrios along the coast – the rusty red hull pockmarked with cavities, dissolving in the ocean. There’s also a trip to Delphi, an ancient site in the shadow of Mount Parnassus, where the legendary oracle once told the fate of thousands of ancient Greeks in the basement of the Temple of Apollo. 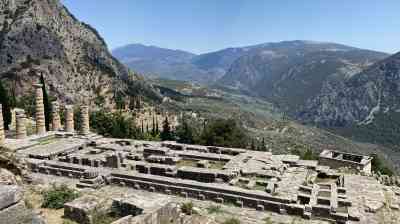 The Temple of Apollo, Delphi

Towards the end of our ten-day journey, the island of Ithaca comes into view, writhing in the Ionian Sea like a question mark. It’s a dramatic sight: forested mountains plunge vertically into an inky sea that has inspired countless stories of sea monsters and mermaids. I remember Odysseus and his ten-year quest to reach this legendary land.

My own trip may not have gone exactly as planned, but it turns out that I rather liked being able to go with the flow.

Katie Gatens was a guest of British Airways (ba.com) and Elixir Cruises, which offers seven nights’ half-board on an Ancient Paths voyage from £2,178 pp (elixir.cruises). Fly to Athens