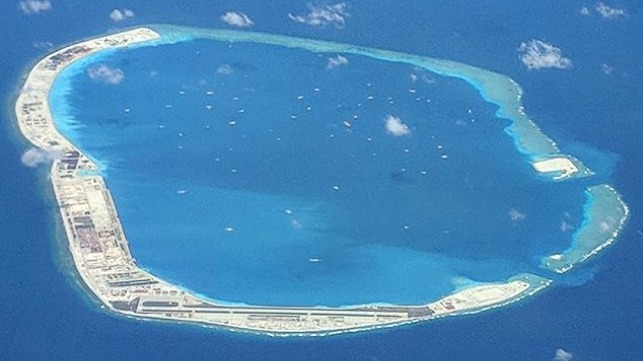 When more than 50 million Filipinos vote on May 9 for a new president, they will decide much more than who will be the next occupant of Malacañan Palace. At stake is the country’s foreign policy and its impact on US-China strategic competition in the Indo-Pacific region. While waiting for the result, Washington can close its “credibility gap” with Manila and strengthen regional security in the face of Chinese maritime belligerence.

Hyperbole abounds when it comes to national security. But these electoral ramifications are simply rational. Since the turn of the century, Philippine presidents have tried to balance Beijing and Washington, its powerful neighbor and longtime ally, respectively. But this balance, which should mimic a delicate geopolitical tightrope, is as subtle as a seesaw.

The balance shifted again when Rodrigo Duterte took over as president in 2016. Duterte derided the United States for its imperial past. He has long deemed US security guarantees worthless after China seized Mischief Reef in 1995 and Scarborough Shoal in 2012 from the Philippines, and Washington has never rallied to his defense.

Four months into his term, Duterte said goodbye to Washington and hugged Beijing. He decided that the militarily weak Philippines should appease, not oppose, a rising China. Recent memories in Manila of conflicts in the South China Sea or Chinese bullying have become faint, almost non-existent.

For most of his administration, Duterte matched his Sinophile words with his deeds. He secured $15 billion in Chinese investment pledges. Much to Beijing’s delight, it has canceled key security initiatives with the United States, including the 2014 Enhanced Defense Cooperation Agreement (which allows the United States to equip prepositioned military equipment and troop rotations) and the 1999 Visiting Forces Agreement (which allows US forces to operate effortlessly in the Philippines). during a crisis). Duterte hoped Beijing would reward his “goodwill” by guaranteeing the Philippines’ economic development and rescinding its aggressive claims to the South China Sea. Whoops.

Five years later, Duterte’s great appeasement leaves much to be desired. Only about 20% of China’s $15 billion in infrastructure pledges have reached the Philippines. China provided as many concessional loans and grants to the Philippines in 2019 as the United States. Duterte also gained little on the high seas.

For the past three years, China has waged war on Philippine ships and asserted bold claims in the South China Sea. Chinese coastguards or maritime militia vessels have rammed and sunk Filipino fishing boats, thwarted military upgrades of Philippine-claimed features, invaded disputed reefs with hundreds of fishing vessels and water cannon refueling near contested features to exhaust, intimidate and force Manila to relinquish control of parts of this critical waterway to China.

The pressure seems relentless with no signs of easing. Most recently, on March 14, the Philippine Ministry of Foreign Affairs approached the Chinese ambassador for the “illegal intrusion” of a Chinese navy Dongdiao-class electronic reconnaissance vessel in Philippine waters after lingering in the Sulu Sea for three days.

Duterte now recognizes that China is no longer the friend he believed in or dreamed of. Having incurred the costs of military aggression but reaping none of the economic rewards, Duterte turned around. In April last year, he pledged to send “gray ships to claim” oil and minerals from the South China Sea. In August, he backed off from 18 months of threats to rescind the visiting forces deal and began to mend his fragile relationship with Washington. The Filipino spell of American rapprochement was cast.

Duterte is not alone in his new views. Most of the Philippine military and diplomatic establishment has maintained ties with Washington despite their leader’s pro-China leaning. Today, however, these officials and Duterte recognize that “the freedom of the Filipino people depends on the balance of power in the South China Sea”, as Foreign Minister Teodoro Locsin has said. People agree. A June 2019 survey found that 93% of Filipinos want to regain control of Chinese-occupied islands in the South China Sea.

Though opinions of the suitors vary, their administrations are likely to mix economic cooperation with military confrontation with Beijing. At the same time, Manila will strengthen and strengthen its alliance with Washington and other regional partners to ensure that the South China Sea does not turn into a “Chinese lake”.

It’s good for the United States and its Quad partners. Duterte’s preservation of bilateral security agreements and a new administration will strengthen the Indo-Pacific alliance network through increased training, exercises and access to Philippine bases. This will allow US forces to persistently deter Chinese aggression and deploy quickly in an emergency.

But the expected benefits come with more work.

For starters, Washington should revise the Visiting Forces Agreement or Mutual Defense Treaty to stipulate that an attack on Philippine forces in the South China Sea would trigger a US response. (So ​​far, Washington has promised such a reaction at the pulpit, but never codified it at the negotiating table.) The two countries should also update their naval rules of engagement to reflect the advent of forces. Chinese paramilitaries and gray zone. Bilateral security drills must also address and resolve the hybrid threat from Chinese ships.

Whoever becomes the next president of the Philippines must craft a deft foreign policy that balances two increasingly antagonistic great powers. Washington can avoid tipping the scales against itself by no longer taking Manila for granted. It must clarify its commitments and provide the Philippines with the necessary guidance and capabilities to fulfill those commitments. After all, that’s what allies are for.

Nick Danby is a US Navy intelligence officer deployed to Japan. The views expressed in this article are those of the author and do not reflect the official policy or position of the United States Navy, United States Department of Defense, or United States Government.


The opinions expressed here are those of the author and not necessarily those of The Maritime Executive.