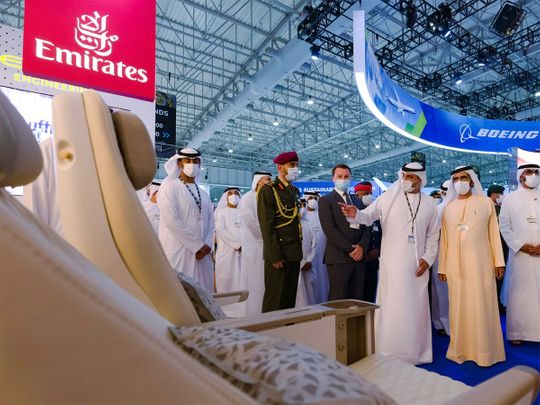 Dubai: The total number of deals reached at the 2021 Dubai Airshow topped 130 billion dirhams on Monday, with UAE-based companies taking the lead.

Emirates SkyCargo has announced an investment of Dh 3.6 billion to further expand its cargo capacity. The freight operator said it will add two new Boeing 777 Fs to its fleet and also signed an agreement with Israel Aerospace Industries (IAI) to convert four of its B777-300ER passenger jets to cargo planes.

“The past two years have highlighted the importance of supply chain connectivity and the availability of air cargo capacity for communities and global economies,” said Sheikh Ahmed bin Saeed Al Maktoum, President -Chief Executive Officer of the airline and the Emirates group, in a press release. . “We are delighted to announce an investment to further expand our freight capacity. “

At the same time, in the defense sector, Halcon, an EDGE subsidiary, won a 3.2 billion dirhams contract with the United Arab Emirates armed forces for its range of “Thunder” and “Desert” precision-guided munitions. Sting ”.

“This is an important contract globally for this type of weapon system,” said Saeed Al Mansoori, CEO of Halcon. “It is with a great sense of responsibility in having been entrusted with this undertaking that we move forward with the confidence that the performance of our systems will fully justify the confidence of the United Arab Emirates armed forces in us.”

Sheikh Mohammed started the tour by visiting the exhibition of the Russian fifth-generation Sukhoi Su-75 stealth fighter aircraft. He also visited the Airbus pavilion where he was briefed on the company’s new aircraft and the services it provides in the MENA region from its head office in Dubai.

He saw the display of Boeing’s 777X9 wide-body aircraft, the most fuel-efficient twin-engine commercial airliner in aviation history, and also stopped by the display of Emirates with its A380 aircraft configured to four classes.