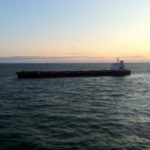 The Capesize market made a revival this week, exiting the fortunes of red as the tide on values ​​moved closer to the teen low on the 5TC. Far from still in smooth sailing territory, the market doesn’t look quite ready to embrace ever higher levels as Friday’s index sent values ​​down from -981 to $12,599. The recovery in tariffs involved most sectors of the market as an increase in cargoes came to market as charterers feared a last chance situation before tariffs took off. The Transatlantic C8 was up +223 week-over-week to close at $12,417. The Pacific region had to deal with Typhoon Muifa this week as it disrupted ship schedules off the Chinese coast, particularly in Shanghai. The Transpacific C10 closed the week on Friday down -3327 at $12,559. Sentiment in the Capesize market has clearly improved with many bullish for further lifts from here.

The Panamax market started the week on solid footing with the uptrend continuing following last week’s surge. The Atlantic was mainly centered on CE South America, with September and October arrivals rushing in early in the week. Similarly in Asia, with support from NoPac cereals and Australian minerals, this gave some momentum to the market on Monday/Tuesday. With healthy Indonesian demand continuing in Southeast Asian positions, demand has been good from all angles. However, in the middle of the week, with a multitude of fixations and failures in both basins due to an FFA sale, the market once again appeared exposed with an increase in tonnage in the Atlantic. Meanwhile, something of a stalemate ensued in the Pacific with neither side willing to concede. Period activity increased early in the period thanks to a firm spot market with a handful of short-term trades around the $17-18,000 mark.

Fortunes were mixed as stronger rates were seen in Asia earlier in the week. However, by the end of the week, some participants said the pressure had eased a bit as a new limited survey entered the market. The opposite could be said for the Atlantic, which saw positive momentum gain in key areas such as the US Gulf as the week progressed. Few period activities surfaced, but an open Black Sea of ​​63,500 dwt would have been set for a year in the low $16,000s. From the Atlantic, stronger cargo flow saw a 57,000 dwt covering a delivery trip to the US Gulf and a new delivery to India amid $20,000. Elsewhere, a 55,000 dwt would have been repaired for a trip from the Mediterranean to the US Gulf in the $20,000 range. From Asia, a Singapore of 58,000 dwt secured a voyage via Indonesia with further delivery to the Philippines at $20,000. A 57,000 dwt also opened in Singapore secured a voyage via Indonesia with further delivery to China in the $19,000 range.

A week of positivity on both basins. South America’s east coast continued to make strong gains as sources cited more investigations and a lack of fast tonnage as major factors. A rumored 36,000 dwt was set for a voyage from Recalada to northern Brazil at $19,000 at the start of the week and levels would be in the $20,000s as the week drew to a close. The United States Gulf also saw more activity, with 39,000 dwt set from Port Canaveral to the UK-Continent range with an expected cargo of wood pellets at $17,000. In the Mediterranean, a 35,000 dwt set from Iskenderun to West Africa with an expected cargo of steels at $17,000. In Asia, there were small gains in most regions, with sources saying they saw more surveys this week. A fixing of 28,000 dwt from Singapore via Western Australia to Japan was set at $17,500.
Source: Baltic Stock Exchange