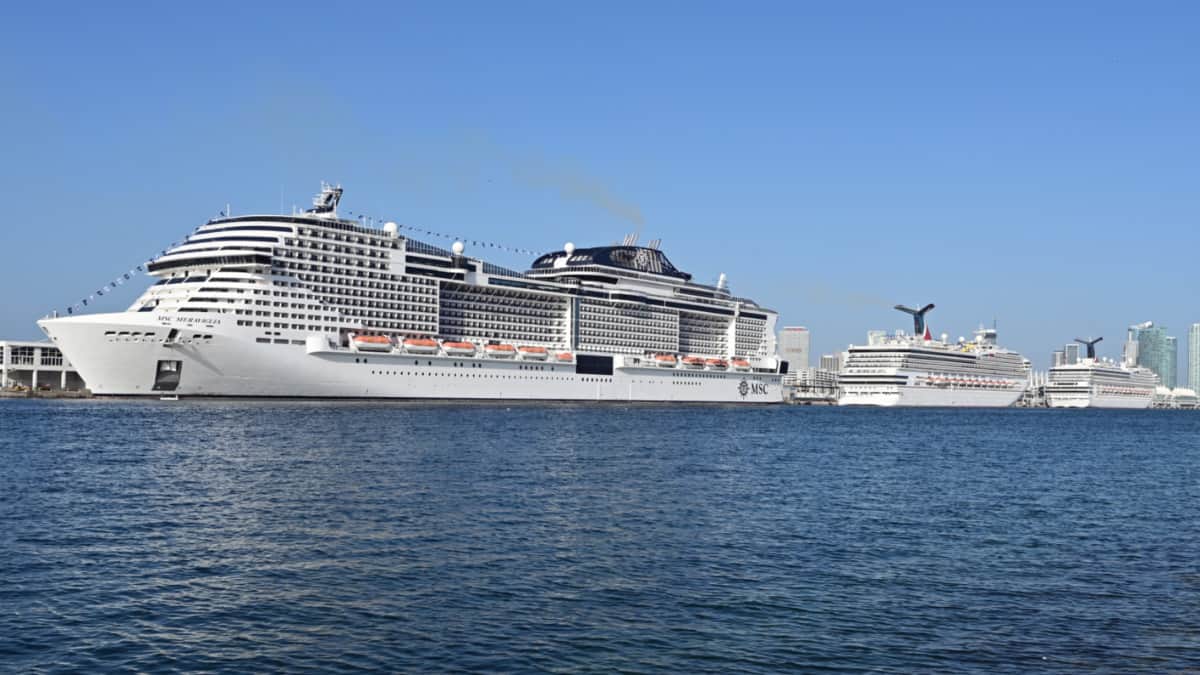 Here’s your weekly cruise news update as Carnival Cruise Line brings back a popular program, plus coverage on some new ships, including from Royal Caribbean and MSC Cruises.

It’s time to make sure you’re up to date on all big news from last weekincluding Carnival Cruise Line bringing back a popular priority program, which we’ll talk about a bit later.

We also have coverage on MSC Cruises naming its largest ship ever built, the new MSC World Europeanother construction milestone for Royal Caribbean Icon of the seasthe godmother revealed for the largest cruise ship in the world, wonder of the seasand even more news from Royal Caribbean as a major deal was struck with PortMiami, Florida.

You can also watch the cruise news update below:

We start with MSC Cruises’ massive new ship, the MSC World Europe, which officially bears the name during a ceremony at the brand new Grand Cruise Terminal in Doha, Qatar, which took place on November 13.

After the ship was handed over to the cruise line during a ceremony at the Chantiers de l’Atlantique shipyard on October 24, it left on October 31 in preparation for its christening ceremony in Qatar.

The ship’s captain, Captain Marco Massa, took part in the official christening ceremony, and the event was hosted by comedian, producer and entrepreneur Hamad Al Amari. The ceremony included performances by local artists, a video projection on the ship’s hull and a creative drone show.

MSC Cruises celebrated the momentous occasion with a spectacular fireworks display over the Doha skyline and a gourmet gala dinner at the ship’s signature restaurants.

As the largest ship in the MSC Cruises fleet, the 6,762 passenger MSC World Europe is one of the largest cruise ships in the world at over 215,800 gross tons and powered entirely by LNG.

Updated construction of the icon of the seas

Royal Caribbean’s highly anticipated new ship, Icon of the seasis takes shape at the Meyer Turku shipyard in Finland, where the ship is currently under construction.

In a record-breaking maneuver, the shipyard installed the incredible AquaDome aboard the ship, the largest glass and steel structure ever mounted on a cruise ship.

It took more than 80 hours of precise coordination to place the 363-tonne dome over the forward section of the ship, where it will cover one of the ship’s signature new quarters.

The AquaDome is 82 feet tall and 164 feet wide, with 673 panes of glass offering unparalleled 220 degree views and sweeping ocean views.

The dome structure also comprises 712 aluminum panels and was assembled separately, also at Meyer Turku, before the massive lifting operation with a specially designed 155 ton platform.

It took 1,640 feet of steel cables to lift the dome in a delicate operation that required perfect weather conditions, including light winds, to ensure a safe and secure installation. The dome has now been welded into place on the ship.

Now begins the next phase of AquaDome construction, which includes interior fit-out and installation of seating, lighting, bars, restaurants, lounges and other amenities, including a 55 feet tall that will play a dramatic role in water shows.

Icon of the Seas will become the largest cruise ship in the world at 250,800 gross tons when it debuts in January 2024, sailing on seven-night itineraries in the Eastern and Western Caribbean from Miami, Florida.

Wonder of the Sea Godmother Revealed

Royal Caribbean revealed the godmother to its Oasis-class mega-ship, Wonder of the Seas. “Wonder Mom” ​​was chosen after a search began in August on popular social media platform TikTok with a contest using the hashtag #SearchForWonderMom.

Royal Caribbean’s ‘Wonder Mom’ is Pennsylvania resident Marie McCrea, who was nominated by her daughter, Allie, in the TikTok contest. McCrea will preside over the ceremony on December 9 at wonder of the seas new year-round homeport, Port Canaveral, Florida.

After the ceremony, McCrea and her family will embark on the 7-night Caribbean cruise with accommodations in the ship’s ultimate family suite, which includes an in-suite waterslide, movie and karaoke room, game consoles and a private balcony.

Royal Caribbean will also offer the family first-class flights to and from Port Canaveral, and provide spending money. The sail will visit Royal Caribbean’s private island destination in the Bahamas, Perfect Day at CocoCay.

A Royal Caribbean panel reviewed the top submissions before choosing McCrea for the honor. The cruise line has also invited the Wonder Moms, finalists, to embark on wonder of the seas with their families.

wonder of the seas is the largest cruise ship in the world with 236,857 gross tons and a capacity of 5,734 passengers in double occupancy.

The ship entered service last spring, with a maiden voyage on March 24, offering a short series of Eastern Caribbean cruises from Fort Lauderdale, followed by a summer program in the Western Mediterranean, sailing between Rome and Barcelona.

The ship arrived in Port Canaveral on November 13 and will embark on a 3-day cruise to the Bahamas on December 4 before beginning a series of 6-8 night sailings in the Eastern and Western Caribbean.

The wait was long, but finally, Carnival Cruise Line is bringing back its Faster to the Fun program for cruises departing December 1, 2022 and beyond. The good news is that guests have already started purchasing the priority program, despite some technical issues on Carnival’s website.

Passengers should note, however, that the limited program is not available for purchase until a certain number of days before each cruise, so that the cruise line can assess the number of priority passengers who will sail.

Faster to the Fun prices vary by ship, cruise length and itinerary. The starting price listed on the Carnival website is $39.95 per stateroom, but the price increases depending on the port. The one-time purchase per cabin will provide priority services to all passengers booked in that cabin.

Faster to the Fun was initially suspended when the cruise industry shutdown began in March 2020.

Due to increased health and safety protocols and the need for better crowd control on boarding, the schedule was not reinstated when cruising slowly began to resume in July 2021.

As health and safety protocols began to ease, staffing shortages continued to impact Faster to the Fun and kept the program on hiatus as it was too difficult to provide all of the benefits sought. with appropriate quality.

Now that operations have returned to pre-pandemic normal, it’s now possible to bring Faster to the Fun back with all the options customers have been looking forward to.

Royal Caribbean and PortMiami have concluded one of the most important agreements ever concluded for the port, with the harbor commissioners approving a lease that will span 50 years and bring an estimated $2.8 billion to the local economy.

The new agreement between Royal Caribbean and PortMiami is one of the largest development and lease agreements ever for the port.

A key feature of the new deal is an all-new Terminal G dedicated to Royal Caribbean International and its sister cruise brands, including Celebrity Cruises, with a 36-year lease term.

Another part of the deal extends Royal Caribbean’s lease of space for the cruise line’s global headquarters, a project that began several years ago but was temporarily halted in May 2020, when Royal Caribbean had to mitigate financial losses due to the industry-wide closure of guest operations.

The potential positive economic impact of the new agreement is staggering. The deal is expected to generate approximately $2.5 billion from the use of Terminal G and $260 million from the headquarters lease, as well as create 12,000 jobs.

So those were just some of the cruise stories from another busy week, we have all the coverage including Royal Caribbean test some changes in the dining roomCarnival Cruise Line reintroduction of masks on boardRoyal Caribbean publish its 2024 European deploymentsDisney Cruise Line Announcement the purchase of the Global Dream ship, the Port of Galveston reaches new heightsCarnival at increase operations in NorfolkVirginia, Holland America presents a new friend referral program and more.