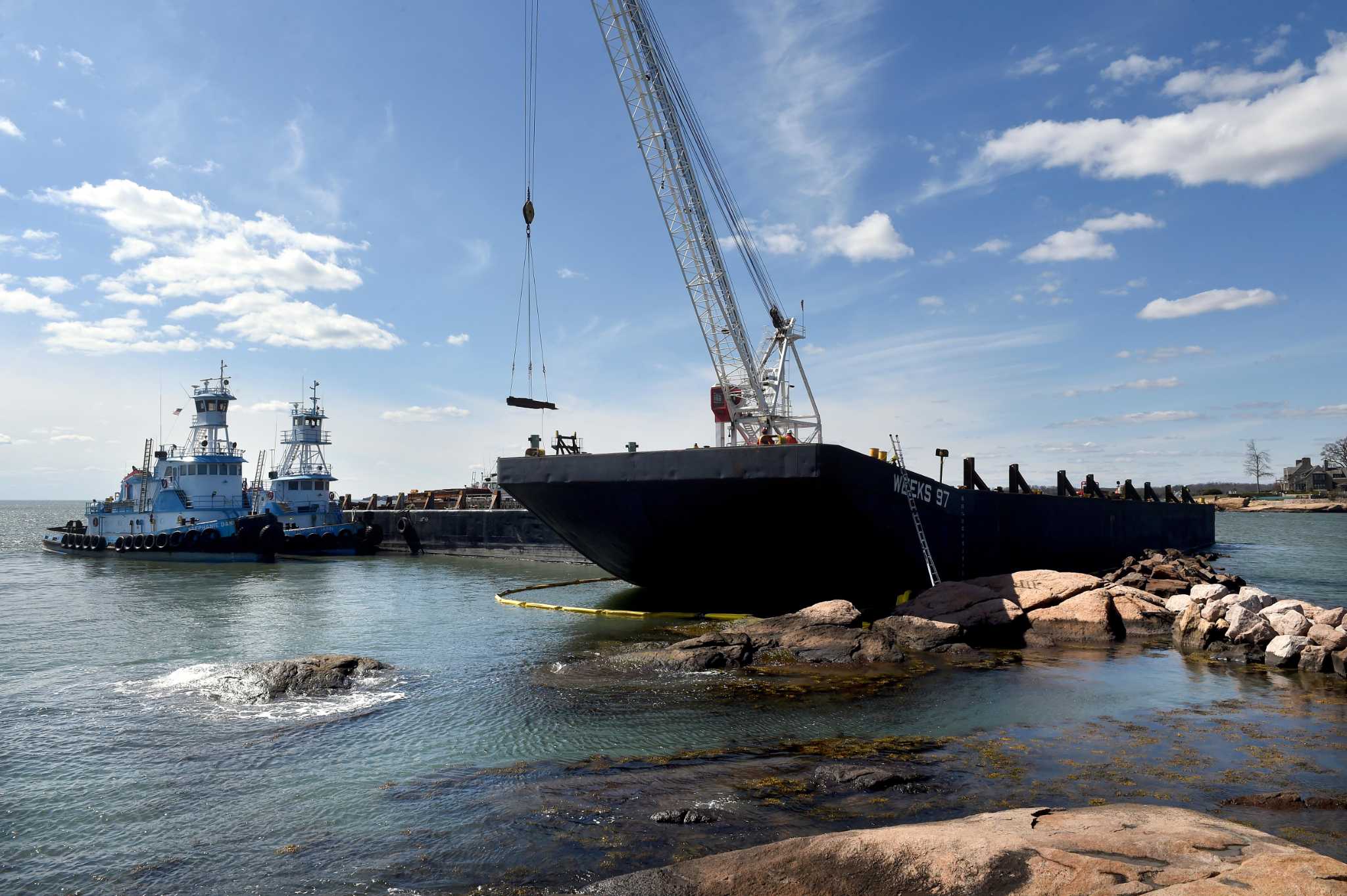 GUILFORD – A marine construction company is struggling to remove its 250ft long, 6,000 tonne barge which ran aground on the breakwater near Sachem’s Head last week.

The company hoped to have the vessel in the water by late Tuesday afternoon or Wednesday afternoon, according to a company spokesperson.

The barge, owned by New Jersey-based Weeks Marine, was en route from Electric Boat in Groton, carrying salvaged steel from a job there, to its yard in Jersey City when it turned detached from a tug crossing Long Island Sound during a storm March 31 and crashed into the breakwater near a local yacht club. Weeks was building a pier at Electric Boat for a nuclear submarine, according to the spokesperson.

Since then, the ship has been stuck against the rocks.

Before removing the vessel, workers must ensure that it will not sink.

“There are tests that need to be done on the tanks to make sure they’re good,” Hobson said.

“Based on a visual inspection, we assume that nine of the 11 tanks on board are good. We also need to test them. We have to press them with air to test them and it takes a little time.

“We’re making sure we have it in place now, so we don’t pull it off the pier and end up with another problem – the potential for sinking,” Hobson said.

“So we want to do it once, do it right, make sure everything is in place,” like Coast Guard approval on their salvage plan, he said.

Tanks are “empty spaces” that allow the barge to float. “So when these voids are pierced, they get water in them.” Hobson explained.

The barge got stuck along the rocks over the weekend. And moving the barge is not as easy as towing it.

“It took us a day or two to get the proper recovery equipment on site,” Hobson said. Three tugs and a crane were on site Monday and rescuers are waiting for fittings that will help them test and/or repair “voids” (tanks), he said.

“We have a salvage plan that needs Coast Guard approval that has been submitted and we’re waiting to hear back on that at this time,” he said.

“We’re also continuing to move the plan forward – we’re anticipating approval – they just have to do what they have to do for due diligence,” he said.

Weeks is a dock and dredge company that does marine construction and beach construction. The company doesn’t do much salvage, but it is working to remove the barge because, Hobson said, “it’s our barge.”

When the barge is ready to be moved, two large ocean tugs will push the barge off the rocks at high tide, he said.