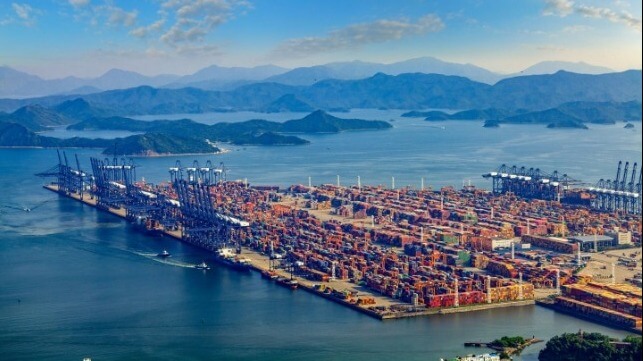 Just as it appeared that much of the world was seeing the number of COVID-19 cases decline and that the wave of Omicron might subside, China announced sweeping new lockdowns in the face of rapidly rising numbers. positive tests for the virus. China and the shipping industry moved quickly to try to allay some fears and misinformation that shipping was operating normally, but the lockdowns will nonetheless impact manufacturing and other sectors, even as ports can continue to operate.

China has implemented a strict zero-tolerance policy and on Sunday announced lockdowns that would span 19 provinces reaching key industrial and port areas, including Shenzhen and sections of Shanghai, home to the two largest container ports. of the world. While the overall number of cases remains low, China saw positive tests more than double overnight and triple in three days over the weekend. As a result, Shenzhen, a city of 17.5 million people, was sentenced to a strict lockdown starting today. All non-essential workers are required to stay home for a week and during this time the adult population will be tested three times for the virus.

One of the region’s major logistics companies, SEKO Logistics, issued a statement on Sunday saying ports were closing and ships would be diverted from the Shenzhen area, but backtracked today saying ports and specific Yantian were working normally. Similarly, Maersk issued a customer bulletin saying: “Terminals in major ports continue to operate as usual, including vessel operations, yard handling and entry and exit. We are closely monitoring the situation and aim to bring you the most up-to-date information so that we can continue to meet the supply chain needs of our customers given the context of the situation.

Workers at China’s major industrial ports live in barracks and are generally closely watched. It is unclear whether they will be considered essential workers for the current shutdowns, but in the past they have been able to continue to work under close supervision and with limited access to the wider community. China said it would further tighten controls requiring all truck divers seeking to enter port areas to provide a negative COVID test and be retested upon entry.

“The lockdown in China, however, is expected to bring further turmoil to the already broken supply chain, Container xChange warns in a bulletin on the current situation. “Lockdowns in Shenzhen, Zhejiang, Shanghai, Jilin, Suzhou, Guangzhou and Beijing (19 provinces on Sunday, likely more to come in a few days) imposed now are clearly going to severely restrict the movement of containers through these ports which, as we’ve seen in the past, prove even more detrimental to the global supply chain.

Shenzhen also closely borders Hong Kong which has tried to control dramatic virus surges by ordering its own lockdowns. To expand controls, city and provincial governments have agreed to immediately begin further limiting border crossings with the city. The ferry from Shenzhen to Hong Kong airport is suspended and trucks seeking to cross the border will have to change drivers at the border.

The latest troubles come as the shipping industry was left on edge during the war in Ukraine and with memories of the disruption caused last year by the COVID-19 outbreaks that hit both Shenzhen and the terminal. international container ship from Yantian to the port. Container xChange, however, reports that two weeks after “Russia’s invasion of Ukraine, there appears to be a negligible impact on container prices and rental rates in China.” Their market analysis shows that container availability improved after the Chinese New Year with prices falling. In their latest bulletin, however, they warn, “the supply chain must prepare for further turmoil in the months ahead.”

“The blockages in China will further reduce capacity and cause already inflated shipping prices to spike. The shock waves will be felt in the United States and America, and almost everywhere in the world,” says Dr Johannes Schlingmeier, co-founder and CEO of Container xChange.

Although ports may continue to operate, the fear is that China’s latest restrictions will stifle export supplies, creating tumbling effects on the global supply chain in the coming weeks.