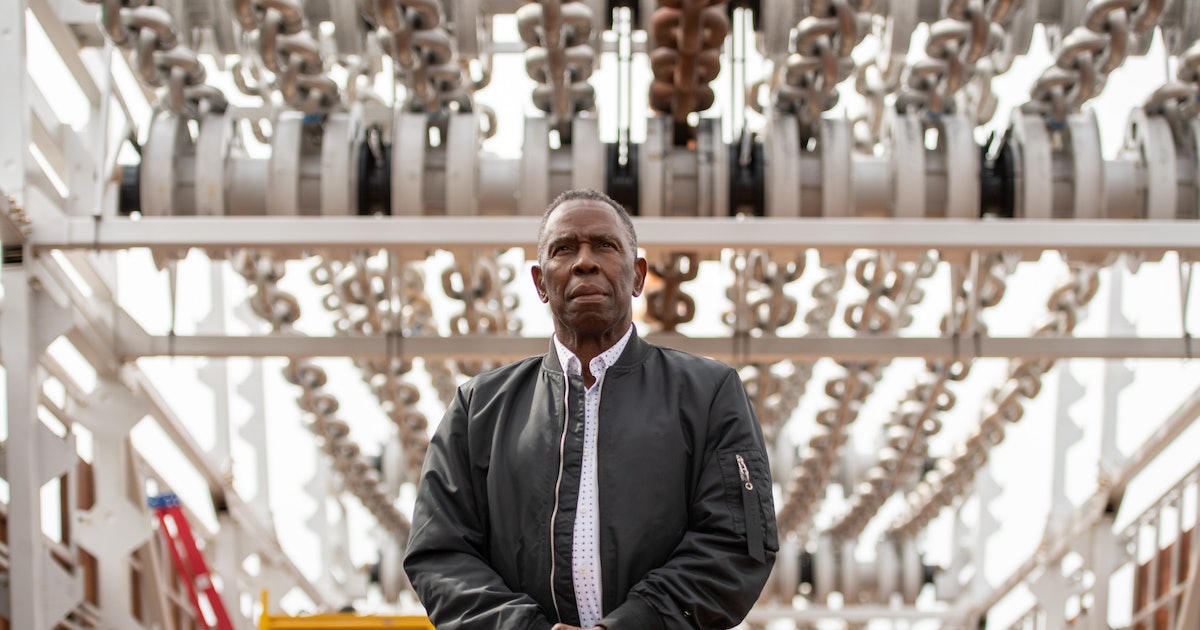 Charles Gaines is perhaps best known for his drawings – which, over his 50-year career as one of the greatest conceptual artists of the 21st century, depicted faces, trees and the African continent plotted on a grid. – but his next project couldn’t exist further from the page. Gaines, whose groundbreaking works have been the subject of more than 70 solo exhibitions and several hundred group exhibitions since 1972, will unveil his first public artwork on Governors Island on October 15. moving chains, it’s an installation of the highest order: a 100-foot-long sculpture that looks like a shipping container, but is meant to evoke the hull of a ship. The piece is a rectangular wooden structure that viewers can walk through, simulates the strong and intense sensation of being trapped in the belly of such a ship, thanks to nine rows of huge chain links that rotate above the sculpture.

Gaines, now 78, has spent the past half-century creating works that question subjectivity, the validity of imagination, and how race affects lived experience. In conversation, the artist is philosophical, itinerant, and expansive, covering concepts that are hard to understand until you’ve given them some thought. This type of multilevel thinking, grounded in both the abstract and the tangible, is what makes Mobile chains such a fascinating piece. The sculpture depicts three related themes: American capitalism, born on the backs of enslaved Africans; Manifest destiny and colonial imperialism, and racism. Mobile chains means to specifically shed light on how these three ideas are intertwined and, in fact, dependent on each other – and how this fundamental financial system continues to shape American life today.

“Nobody really taught in American schools the idea that slavery was the product of imperial and colonial practice,” Gaines tells me, sitting in a cafe inside the Manhattan hotel where he stays (the artist is based in Los Angeles; he works as a professor at CalArts). “It’s clear to a mad person that they’re connected, but it wasn’t taught that way. I think it was because of a certain idealism that they wanted to attach to these stories and these principles, ennobling them and suppressing violence. It was necessary to keep it going.”

It is appropriate that Gaines creates work based on the idea of ​​systems – he practically wrote the book on systems in art. In the 1970s, Gaines’ work took a series of alphanumeric systems and substituted them for imagination; instead of imagining a face that he would then draw, Gaines followed a grid based on letters and numbers to create art. Mobile chains is a continuation of this linguistic work, he says. “My interest in this whole project is to bring together this critique of American history and culture through these three topics, which I think have been deceptively separated,” he continues. “I’m trying to expose their connection, which reveals this really problematic underlying story that highlighted the violence necessary to build the United States.”

Gaines’ predilection for dense theoretical subject matter drew criticism from the art world in the 1970s and 1980s. To hear Gaines say it, he feels his career has been marked by resistance against him, his ideas, and the makes him a black man. “Art is just raw,” he adds. “It’s a tough life if you reach a level of success. So I don’t expect to be greeted with a marching band or anything, but the art world in the 1960s and 1970s was old-fashioned racist – a lot of black artists weren’t properly recognized, and part of that had to do with the fact that their interests weren’t seen as as sophisticated as what white artists were doing.

“Why, when I was exhibiting in the first galleries at the time, couldn’t I find writers or curators interested in advancing my work? In the galleries where I was exhibited, I was considered a backstage artist. And even when I had the space before, I don’t think I had the full strength of the gallery behind.

Still, Gaines consistently put in the work despite all roadblocks, systemic or otherwise. Perhaps his tenacity can be attributed to his prolific mind, or his insatiable curiosity about the world around him, which he considers more like Nietzsche or Socrates than Monet or Matisse. Be that as it may, the artist remains in the foreground; this year, in fact, he will receive honors from Creative Time (the non-profit artistic association that commissioned moving chains, with Governors Island Arts and Times Square Arts) at its annual gala in December.

“In the meantime, I also have this general philosophy that artists shouldn’t complain that art is difficult,” he says.