Celebrating the “International Year of Glass” in New England 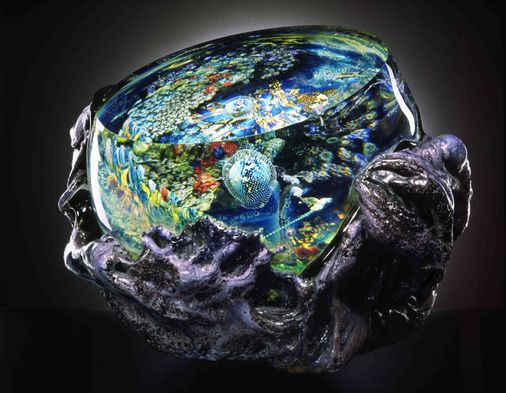 “Fired Up: Glass Today” at the Wadsworth Atheneum Museum of Art in Hartford features more than 50 glass artists, including masters such as Dale Chihuly and Lino Tagliapietra. It tells the story of the American Studio Glass movement, launched in the early 1960s.

Italy has lineages of glass artists working in great traditions dating back to the Roman Empire. Another exhibit, “Sargent, Whistler, and Venetian Glass: American Artists and the Magic of Murano” at the Mystic Seaport Museum, explores American artists’ love affair with glass made on the Venetian island of Murano between 1860 and 1915.

American glass, on the other hand, is rooted in factories. Artists such as Chihuly and Harvey K. Littleton developed techniques for working on a smaller scale.

“It was so experimental at first,” said Brandy Culp, curator of American decorative arts at Wadsworth, who curated “Fired Up.” “Artists would go abroad, watch Venetian maestros and bring back what they learned.”

One of these maestros was Tagliapietra. In 1979, he was invited to the United States to teach. He kept coming back.

“Leave this system [in Venice] was frowned upon, he broke with tradition. But he was excited because Americans were hungry to learn,” Culp said.

“What I loved most about America was the freedom, the freedom to do whatever you want to do,” Tagliapietra, quoted in a ‘Fired Up’ label, said. “The challenge of doing something you never thought you could do.”

These masters provide a backdrop for a fantastic array of artists working today, using techniques such as flame work, blowing, sinking, molding and smelting. Many of the pieces featured combine technical wizardry with social commentary. For “Archiving the Ice: Newfoundland”, Caroline Landau made molds of arctic iceberg fragments. She took them back to the studio and blew glass there, creating documents about climate change. (A video follows the remarkable process).

“Black Figure Number 1” by Jason McDonald, in the classic shape of a Greek vase, depicts the silhouette of a man behind bars. Cannabis leaves are engraved around the neck of the container. The article sadly evokes a history of racism around incarceration and drug-related charges.

Cannabis plays a big role in the art of glass, through the manufacture of pipes. There are three spectacular cannabis pipes in “Fired Up”, by David Colton, Hamm Brushland and Robert Mickelsen that would enhance anyone’s high. Colton’s looks like graffiti, Brushland looks like a large potted plant, and Mickelsen looks like an umbrella.

Boston glass artist Wayne Strattman, who has taught glass art at prestigious programs such as the Penland School of Craft and Pilchuck Glass School, says weed pipes are a burgeoning art form. .

“For the past 20 years, these have been the most profitable glass art forms,” Strattman said in a phone interview. “In any small town in New England, there are pipe makers. Collectors line up on the sidewalks outside the galleries overnight to buy them.

Strattman doesn’t make pipes himself – he’s more interested in visualizing electricity. His work is exhibited in “Innovators in Glass” at the Sandwich Glass Museum. This institution’s mission is to tell the story of the Boston & Sandwich Glass Company, founded in 1825.

“At that time, glass was used in a utilitarian way, but the artistic side was and remains superior. It was a marriage of craftsmanship and art. There was pride in doing the best, most creative work possible,” Childs said. She sees a direct line to artists in “Innovators in Glass”.

Natalie Tyler’s “Eagle’s Nest,” made of cast glass and a golden ostrich egg, elevates the notion of the nest into luminous ethers. Tyler, whose studio is in Great Barrington, also has a large-scale outdoor facility in Chesterwood. In “Fire & Ice”, which comments on the climate, 50 or more glass icicles are suspended in a room labeled “Thaw”, and “WildFire” is shaped like a tree on fire.

Back in Sandwich, “EM Colorfield,” from Strattman’s “Mesmer” series, captures a rainbow of lightning in a bottle, using plasma filament light moving inside a bell painted with phosphorus, a luminescent material that emits light when exposed to radiant energy.

“I blow glass and make it light up,” he said. “Science and art go hand in hand. There’s a lot of chemistry with color and workability, and the ability to seal to other materials.

Another inveterate chemist, Josh Simpson of Shelburne Falls, is best known for creating spectacular planetary orbs bubbling with color and light. He is the subject of “Josh Simpson: Visionary Explorations in Glass” at the D’Amour Museum of Fine Arts at the Springfield Museums. Each colored element inside a planet is individually crafted and then integrated, and each piece changes the chemistry.

“So if I’m using 50 or more colors of glass on a planet, I need a very careful recipe, otherwise things could go wrong, sometimes explosively,” he told Scientific American. in 2012.

“Artists can suggest things that a narrow-minded engineer might not think of,” he said. “They don’t have to prejudge that something can’t be done. They are ready to launch.

SARGENT, WHISTLER AND VENETIAN GLASS: AMERICAN ARTISTS AND THE MAGIC OF MURANO