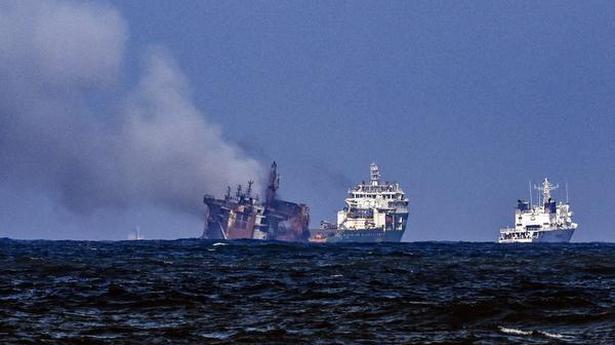 Rescue experts were attempting to tow a burned-out container ship that had been loaded with chemicals into deep water as the ship began to sink on June 2 off Sri Lanka’s main port, officials said.

The water submerged the MV X-Press Pearl’s on the poop a day after firefighters put out a fire that had been burning for 12 days.

Experts were trying to tow the ship further to see because if it sank at its current position off the port of Colombo it would cause severe pollution, Navy spokeswoman Indika de Silva said.

The fire broke out on May 20 when the ship was anchored about 9.5 nautical miles (18 kilometers) northwest of Colombo and waiting to enter port.

The Navy believes the fire was caused by chemicals carried on the Singapore-flagged vessel. It was carrying 1,486 containers, including 25 tonnes of nitric acid and other chemicals that were loaded into the port of Hazira, India on May 15.

The fire destroyed most of the ship’s cargo and polluted surrounding waters and a long stretch of the island nation’s famous beaches.

Sri Lankan police are investigating the blaze, and a Colombo court on June 1 imposed a travel ban on the captain, engineer and assistant engineer from leaving the country.

The ship’s 25 crew members were evacuated last week after an explosion. They are Filipino, Chinese, Indian and Russian nationals.