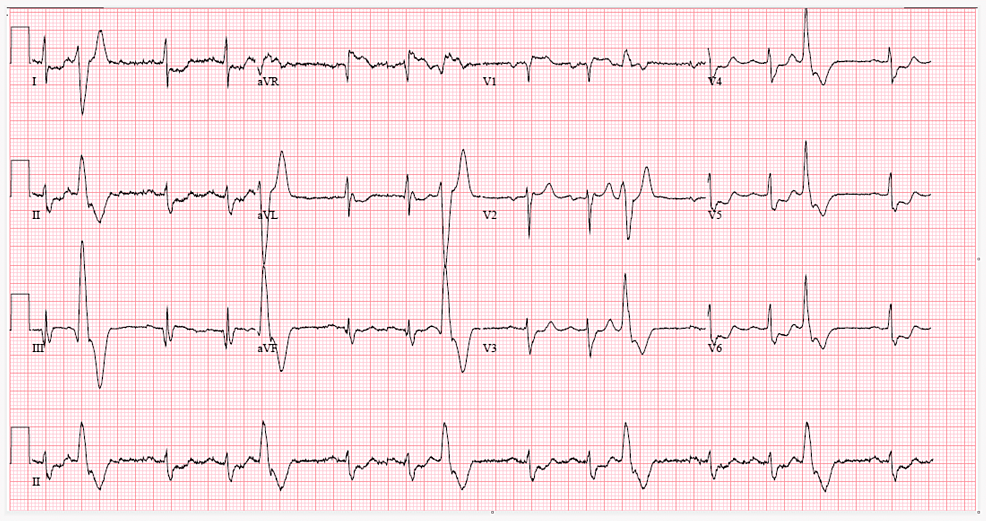 The patient is a 59-year-old Caucasian male with a medical history of coronary artery disease after left circumflex percutaneous coronary intervention, hypertension, hyperlipidemia, right carotid artery stenosis after carotid endarterectomy, d heart failure with preserved ejection fraction, type 2 diabetes mellitus, diabetic nephropathy with end-stage renal disease on hemodialysis, active smoking who was brought in by an emergency medical service following suspected cardiac arrest. He first felt dizzy with hot flashes followed by chest pain while watching television at home. Chest pain has been described as a feeling of pressure originating on the left with radiation to the left neck and arm. The patient then had an episode of syncope witnessed by the patient’s wife who called emergency medical services. He received a 150 mg dose of amiodarone en route to ventricular tachycardia.

On arrival at the emergency department, the patient was noted to be in sinus rhythm with ventricular trigeminy at a rate of 89 beats per minute (Figure 1) and blood pressure 142/68 mmHg; other vital signs were within normal limits. 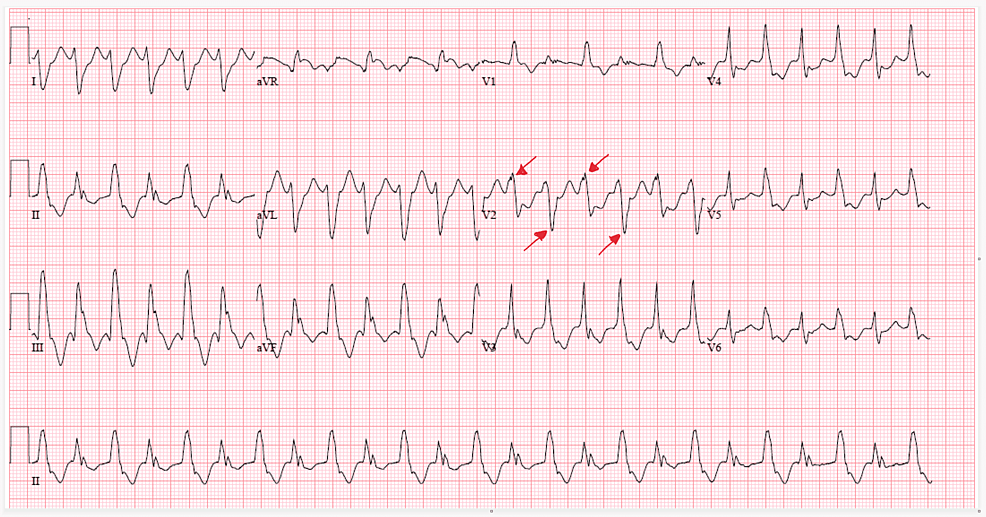 Prior to finding BVT on the night of hospitalization, an echocardiogram was obtained which showed an ejection fraction of 30% to 35% with moderate diffuse hypokinesia, grade 2 diastolic dysfunction, mild mitral valve regurgitation and tricuspid. No effusion was demonstrated that could explain the electrical alternations observed on the ECG. Urgent coronary angiography revealed 40% stenosis of the left main artery, 100% in-stent restenosis of the ostial left circumflex, 90% stenosis of the left anterior descending artery (LAD), and chronic total occlusion ( OTC) of the proximal right coronary artery (RCA). The ACR has received guarantees from the LAD. Coronary angiography was complicated by monomorphic ventricular tachycardia after crossing the aortic valve which could not be interrupted by cardioversion and the patient degenerated into ventricular fibrillation. The patient was finally resuscitated according to the ACLS (Advanced Heart Life Support) protocol and suffered no neurological deficit.

The management of the patient was as follows: he received boluses of amiodarone then started an amiodarone infusion on his arrival in the emergency room due to a finding of ventricular tachycardia. Given the decreased ejection fraction and fears of fluid overload, the patient was taken off the amiodarone drip and started on oral amiodarone. However, he continued to have recurrent episodes of unsustained ventricular tachycardia. Oral mexiletine (two 150 mg doses given, unable to continue due to refractory nausea and vomiting) and IV lidocaine were given as adjunctive therapy and the BVT rhythm subsequently resolved . The patient underwent three-vessel CABG and had no further episodes of BVT after revascularization.

Bidirectional ventricular tachycardia is a rare and unusual ventricular dysrhythmia characterized by a beat-to-beat alternation of the QRS axis. This can sometimes manifest as alternating left and right bundle branch blocks. Our case shows a subtle modification of the anteroposterior axis visible on lead V2. BVT is most commonly seen with digoxin toxicity [1]but can also occur as part of CPVT [2]aconite poisoning [3]and myocarditis [4].

There are three proposed mechanisms for ventricular tachycardia: reentry, triggered activity, and automaticity. The mechanism of BVT was initially favored to be secondary to re-entry, which requires two separate conduction circuits as part of two electrical scars or two distinct alternate exit sites from one scar. [5-8]. Now, it appears that activity triggered by post-delayed depolarizations via calcium channels may be a more likely etiology. Studies have shown that mutations and impaired function of intracardiac sarcoplasmic reticulum Ca2+ releasing channels, calsequestrin and rectifier K+ channels are the likely culprits [7-8]. These mutations are associated with an increased propensity for delayed afterdepolarizations, which is one of the foundations of the “ping-pong model” of triggered activity. This proposed mechanism described by Baher et al. posits that there must be exactly two anatomically distinct foci with different thresholds for triggered events [6]. The last proposed mechanism of BVT is abnormal automaticity, in which alterations of Ca2+ and K+ in cells can increase or decrease intrinsic pacemaker function. [9].

To our knowledge, there are two previous cases of BVT in the literature in the setting of type I myocardial infarction. The first case described in 2009 was a patient with severe disease of the left medial descending anterior region and left midline circumflex. A BVT was found on admission that ended spontaneously without any medical intervention [10]. The second case was in 2014 and coronary angiography showed complete occlusion in the right coronary artery disease with mild diffuse disease in the left system. BVT was found during hospitalization which resolved with a bolus of amiodarone [11].

In the case presented here, coronary angiography showed severe multivessel coronary artery disease with CTO of the proximal dominant right coronary artery, 100% in-stent restenosis of the ostial left circumflex, 40% stenosis of the main trunk left and a 90% stenosis of the middle. BOY. The BVT resolved after a bolus of amiodarone x2 followed by a drip. We attempted to convert the drip to oral Mexiletine, but the patient could not tolerate the drug due to refractory nausea and vomiting.

Bidirectional ventricular tachycardia is a subset of polymorphic ventricular tachycardia and is commonly seen in patients with digoxin toxicity or CPVT, as mentioned above. We present the third known case of BVT in the setting of a type I myocardial infarction. The arrhythmia was successfully treated with amiodarone and the patient subsequently underwent surgical revascularization. Although rare, type I myocardial infarction should be considered as one of the differentials in the setting of BVT.