Artifacts of a revolutionary warship on display at the Maritime Museum

A new exhibit at the New Jersey Maritime Museum in Beach Haven features artifacts from a ship that was sunk in the Mullica River during the Revolutionary War.

The exhibit was donated by the University of Stockton, where students of underwater archeology surveyed the site under the direction of Stephen Nagiewicz, adjunct professor in the School of Natural Sciences and Mathematics.

Nagiewicz said the artifacts came from a ship he named the Phoelpaying tribute to the late William Phoel, who was an adjunct professor at Stockton and a fisheries researcher for NOAA when he discovered the wreck in 2008.

“It was one of 10 privateer ships sunk in the Battle of Chestnut Neck on October 6, 1778,” Nagiewicz said.

Nagiewicz said that at the start of the Revolution, Chestnut Neck was a bustling and thriving commercial center about 10 miles north of Atlantic City in what is now Port Republic. It was an important port, as local ships traveled to New York and elsewhere, carrying mail, trade goods, and cargo. With the onset of war, American privateers took over the port facilities to use as their home base. 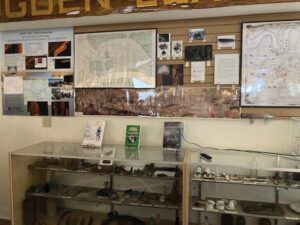 “They would attack and seize the British ships and take their catch to Chestnut Neck,” he said. “Captured ships and their cargoes were sold, and captured ships were often adapted for use as privateers. Privateers played a major role in the war, and without them we would probably still speak in British accents.

Nagiewicz said the British had become so enraged by this constant loss of ships that the British commander, General Henry Clinton in New York, authorized an attack at Chestnut Creek, resulting in the burning and sinking of 10 boats and the death of 50 corsairs.

Artifacts in the museum include pieces of broken liquor or wine bottles, pieces of wood from the hull, and a handmade brick, all charred by the intense fire. Nagiewicz said the handmade brick would indicate there was a fire pit on board for cooking, with the bricks being used to reduce the possibility of a fire on board.

He said the ships were two-masted schooners that were between 60 and 90 feet long.

“Except for some parts of the hulls, very little was left,” Nagiewicz said. “They sat in soft riverbeds, corroding until we could find them with sonar 240 years later.”

“I think it’s a fascinating story, which shows how South Jersey played a major role in the Revolution,” said Deborah C. Whitcraft, founder and president of the museum. “We have books in our lending library for people who want to learn more about the history of Chestnut Neck.”