Alejandro’s Odyssey: escape to Florida on a water bike 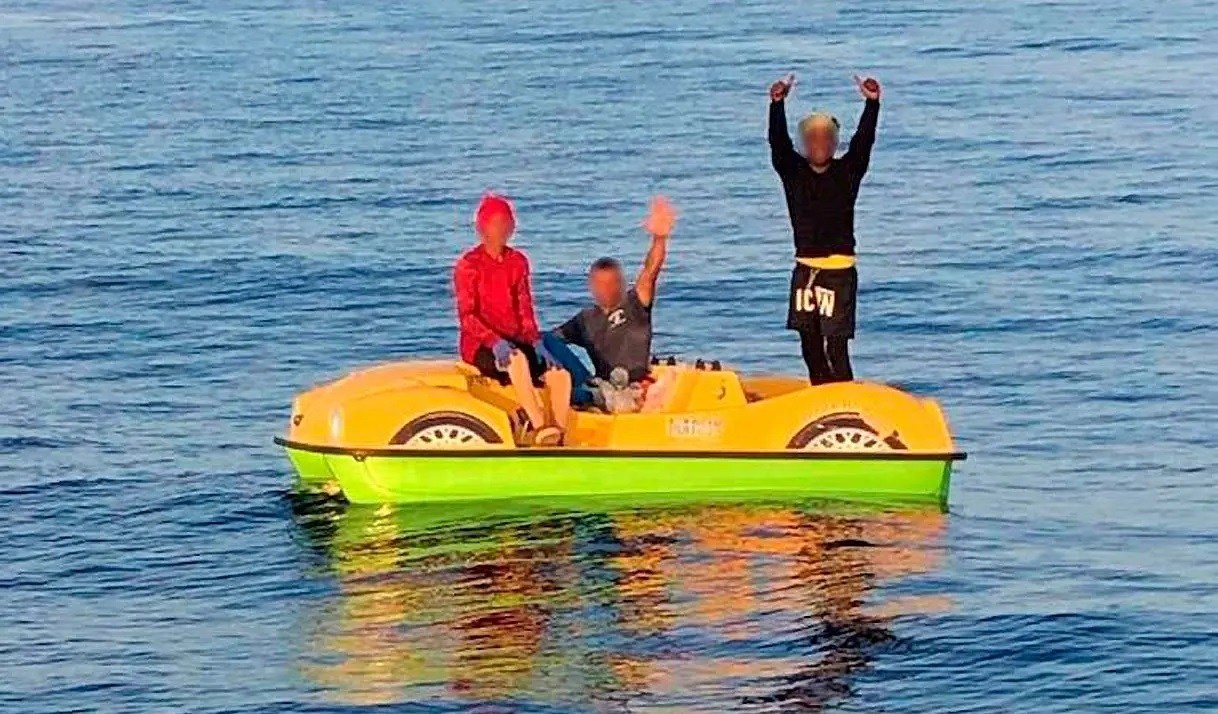 HAVANA TIMES — Alejandro Tamayo Chacon was forcibly arrested. Police officers burst into his home without a warrant and dragged him to the patrol car, along with his mother who had tried to prevent the arrest. The arrest was recorded by family members and posted on social media. It was July 12, 2022.

A few hours later – thanks to the statements to Telemundo51 of Tamayo’s wife, Gloria Salmon – we learned that the young man was one of the three Cuban rafts that were intercepted by the United States Coast Guard on July 9, 2022, about 60 miles south of Key West. , while trying to reach the United States on a water bike. Alejandro and his traveling companions were returned to Cuba along with 70 other rafters, which had also been intercepted by US authorities in recent days.

Why arrest Alejandro Tamayo after his return to Cuba?

According to statements by Gloria Salmon, the officers who arrested Alejandro said he was charged with stealing the water bike he used to attempt to emigrate. After his arrest, the government also appeared to charge the chevron with resisting arrest.

The arrest and subsequent charges against Alejandro Tamayo and his companions should be seen as the Cuban regime’s most common response to stopping irregular migration by sea. I say sea because irregular migration (by other means) has been used by the system as an escape valve mechanism to ease political tensions, especially in times of crisis and instability. In the past year alone, the Cuban government has promoted and used alliances in the region – Nicaragua, in this case – to get involved in a wave of migration with more than 160,000 Cubans reaching the United States illegally. .

While the number of migrants reaching the United States via the Central American route is decreasing, the number of Cubans setting sail has increased. The US Coast Guard had intercepted nearly 2,000 Cubans trying to reach the United States, between October 1, 2021 and until May 24, 2022. But between the end of May (May 24 to be exact) and July 19, 2022 – less than two months – US authorities arrested approximately 1,470 Cubans at sea.

The arrests of Alejandro Tamayo and his companions come at a time when there are more and more people migrating by sea and this responds to the government’s need to stop him through repression. The Cuban government has proven its lack of will and ability to push other strategies to encourage Cubans to stay in the country and therefore we should not be surprised by the idea of ​​persecution and violence as mechanism to discourage us from crossing the Florida Strait.

The proof? They continue to enforce and apply stricter penalties in the new Penal Code, approved by the National Assembly in May 2022, against those who leave the national territory by illegal means. The legal document states that anyone leaving the country illegally “regularly” could be sentenced to eight years in prison.

Nevertheless, the use of reprisals and violence to stop emigration goes against the commitment made by Cuba when signing successive migration agreements with the United States. These agreements stipulate that the United States undertake to intercept Cuban rafters at sea and return them to Cuba. Meanwhile, the Cuban government is committed to using deterrent and non-coercive measures to prevent the flow of irregular migration to the United States. He also said they would not retaliate against Cubans turned away by the US Coast Guard.

Yet in January 2017 – just at the end of the Obama era – the Cuban and US governments sat down again to have conversations on migration and they issued a joint statement in which the US pledged to eliminate “wet foot, dry foot”. » politics, among other points; and the two Administrations are committed to “purely discourage any illegal act related to irregular migration, [promoting] effective bilateral cooperation to prevent and address human trafficking, as well as crimes related to migratory movements that endanger their national security, including the hijacking of aircraft and ships.

This last commitment was used by the Ministry of the Interior (MININT) to complain that the American migration policy for Cubans is responsible for encouraging violent and criminal acts linked to illegal migration. In June 2021, MININT reported that 82 Cuban rafters had been returned, including people who had, in theory, participated in the “robbery of the boat Lista Quinta, which is associated with the sport fishing base of Santa Cruz del Norte, in Mayabeque. “In the statement, they recalled commitments for collaborative efforts and the persecution of the crimes outlined in the 2017 joint statement.

Is punishing the theft of a pedal boat against immigration agreements?

The Cuban government justified the arrest of Alejandro Tamayo by arguing that it was persecuting him for the theft of a ship and not for his illegal departure from the country. However, the Cuban government has identified the theft of the water bike as an act that – despite the strange means – could be reproduced in a context where many people yearn to escape, whether on a kite board or a boat. in polyfoam.

Law 115 of the Marine, River and Lake Navigation Act recognizes a ship as “any floating structure whose gross tonnage is less than [500] or with a motor whose driving force is less than [50] kW. Gross tonnage refers to the total size of a vessel in Moorson tons. Every small ship has a gross tonnage of less than 500, while ships have that number or more. The law also states that pleasure boats are those “intended for tourist, recreational and sporting activities”.

From this point of view, the Cuban government considers a water bike as a pleasure boat. In Cuba, as a general rule, pleasure boats are owned by state institutions. Ships and ships were placed under strict government control due to their potential use as a means of illegal emigration, as well as for other reasons.

Complaints about the impossibility for Cubans to access these types of vessels in tourist facilities have surfaced on other occasions. Writing this into law, Cuban Transport Minister Eduardo Davila issued Resolution 32/22, which prohibits Cubans from importing ships, vessels and naval objects.

Stealing a water bike to emigrate should not be considered a crime. Stealing a water bike to cross 90 miles of shark-infested salt water is a clear sign of desperation. It’s like stealing food because you’re hungry. It’s something that a lot of people think shouldn’t be criminalized because it only happens when people are so poor that they need to steal. But this need in Cuba takes other indications because especially in this case, everything that is stolen belongs to everyone, in theory, but we are denied it. We are denied the enjoyment of these things and denied the chance to purchase them.

Stealing because of hunger cannot be solved by repression. Even less when this repression violates the fundamental rights of which the repressors boast and claim to exist.

Cuban propaganda and institutionalism celebrated the thrust of what they called “penal reform” in the country. It seems that some postulates of this reform were ignored to stop a 23-year-old cyclist / water rafter. This human rights violation proves that the Cuban government is not acting out of its imperative desire to uphold the law, but out of its need to stop irregular migration by sea at all costs. An attitude they have always had, with their most grisly response in 2003, when they executed hijackers from a ship by firing squad, just three days after their return.

In the videos of Alejandro’s arrest and in later statements, you can hear how the women insist that the officers enter the house without a warrant to justify their presence. You can also see how these officers enter the premises and take the young man away and arrest him, while his mother clings to one of his legs.

It was also revealed that Alejandro is not only charged with stealing a water bike, but also for resisting arrest where legal formalities were not followed. Did Alejandro or his family have to consent to police entering their home and forcibly arresting him, simply because they were wearing a uniform and driving a patrol car? Can you resist in this situation?

The answer is relative. The evidence here suggests that the police lack even a basic understanding of penal reform, the law or safeguards. They don’t seem to have to pay for any of their violations. Impunity is their main defence.

Nevertheless, the new Penal Code in force since January 2022 establishes that the authorities and their assistants can enter and search a house to arrest someone. But he clarifies that this can only happen when there is an “arrest warrant” against the person hiding in this property.

If an arrest warrant is not presented, if the reason for the arrest is not known, a person has every legitimate right to resist arrest. They should be able to defend themselves against any illegitimate infringement of their rights, including those by law enforcement. However, what should be is getting further and further away from reality.

As long as this situation persists, it is not foolish to imagine that many more Alejandro will try to cross the Florida Strait on a water bike or any other vessel imaginable.