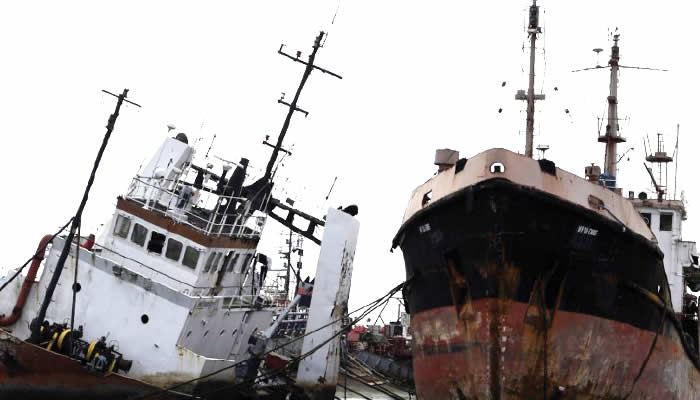 In Nigeria, it is normal to tie up ships and let them sink or rot. In this article, ANOZIE EGOLE looks at the possible causes of this anomaly and the way forward

The maritime industry in the country woke up on April 3, 2022 with another sad story of a gunboat, named NIMASA/Barugu, descending the waters in the Kirikiri area of ​​Lagos State.

The tragic event, which is still controversial among maritime practitioners due to the circumstances surrounding the horrific incident, is believed to be owned by Global West Vessels Specialist Limited.

In the video circulating online, sailors aboard adjacent vessels accused the Nigerian Maritime Administration and Safety Agency of negligence, saying they had reported the impending disaster to the agency for a long time without any response.

NIMASA, like an average Nigerian agency, in a statement quickly denied the charge, saying the owners of the gunboat and the boat itself were in dispute. The agency also noted that the gunboat and owner were still in the custody of the Economic and Financial Crimes Commission.

It is no longer news that there are so many vessels at different locations in Nigerian waters under the custody of the EFCC and the Asset Management Corporation of Nigeria for one offense or the other.

In 2021, the Punch reported that 90 vessels seized by the EFCC were sinking in waters across the country, while many of those temporarily and permanently confiscated by corruption suspects were rotting for lack of maintenance.

Sources in the House of Representatives said the Nigerian Navy, which was mandated to oversee seized, salvaged or confiscated assets, had no budgetary provision to maintain them, leaving them damaged and ultimately overwhelmed.

According to the report, most of the vessels were in Lagos State, which was worst affected by the abandonment.

A maritime lawyer, Emeka Akabugo, told our correspondent during a conversation in Lagos that there have been recurring losses and waste following the seizure of critical maritime assets by some law enforcement agencies.

Akbugo maintained that there had been an increasing number of instances where active vessels held by certain government agencies had been destroyed.

“There have been an increasing number of instances where otherwise active vessels held by the Navy, EFCC, AMCON and even NIMASA have ended up rotting as constructive total losses in the custody of these agencies. This is hardly salutary, because these ships, in addition to providing essential services for the industry, employ hundreds of people directly and indirectly,” he said.

He noted that it was important to have a framework in place not only for the safekeeping, but also for the management of these assets pending an investigation or litigation.

“It is therefore crucial that a framework is in place not only for the safekeeping but also for the management of these assets pending investigation or litigation. This should have been part of the harmonized standard operating procedures on the Arrest, Detention and Prosecution of Vessels and Persons in Nigeria’s Maritime Environment 2016.

“Unfortunately, this was not the case as the SOPs failed to come up with a legal and workable framework. This remains a challenge that could be defended by a collective initiative of all relevant law enforcement agencies. NIMASA, for its part, must urgently publish and begin the implementation of the Nigerian Vessel Detention Regulations, which have long been prepared under its statutory mandate.

Meanwhile, the president of the Shipowners Association of Nigeria, Mkgeroge Oyung, blamed lawyers for the high rate of vessels seized, saying they did not act as if they understood the intricacies of maritime law.

“Lawyers are the problems; they are the ones who are hired and they are members of the Maritime Lawyers Association. They are supposed to know the intricacies of maritime law, and they are its guardians.

“Ships are rotting and AMCON is the largest shipowner in Africa because it has so many ships in its care that are rotting.

“Many ships are sinking because of them. Even the Trinity that sank was an AMCON controlled vessel. My question is, why didn’t they go and stop planes? »

He wondered why the same harsh treatment reserved for the maritime sector was not extended to the aeronautical industry.

According to him, maritime transport accounts for 95% of world trade, pointing out that the maritime industry is getting the most difficult share of the market.

“Arik is under the control of AMCON, just like Aero Contractors, and they are even drawing up new plans. Why doesn’t the system they use in aviation work in maritime?

“The others are like the proverbial five blind men who were asked to touch an elephant and they explained what they touched in their own way. These are the issues we face, which even the people who regulate us don’t understand. not fully.

Another shipowner, Captain Dada Olaniyi Olabinjo, also lamented that despite meeting bail conditions, his vessel, MT Adeline Jombo, has been held by the Nigerian Navy since 2018.

Olabinjo explained that he was arrested alongside his $1 million vessel in 2018 when the ship was charged with bunkering.

“My vessel was arrested with myself in 2018, but the court granted the vessel bail. However, so far it has not been released. By the time they release the ship, there will be nothing inside.

Olabinjo said he was held for 15 months alongside his vessel but was later released but his vessel was still confiscated even after he met bail conditions.

“The vessel was acquired for approximately $1 million. We got it on Dare Boat Charter which means you have the right of ownership. You can also equip the ship and all that, but you’re not the owner. And the ship was boarded on September 12, 2018 by the Navy. It was alleged that the ship was used for the hijacking, which was the basis for arresting me, the ship and everyone else. We were detained for 15 months and there were no charges.

The shipowner also revealed that in 2003 one of his ships was also arrested and the court awarded damages of N20 million in his favor against the Nigerian Navy, but so far, the Navy had yet to obey the court order.

“In 2003 one of my ships was arrested and for three and a half years the ship was with them, we went to court and we won. The court even awarded us 20 million naira in damages against the navy, but till today they have not paid.

Also speaking of a former president of the Nigerian Association of Masters Seamen, Captain Tony Olugbude, pointed the finger at irresponsible port officials as the reason for the delay of ships.

“What I could say is that there are quite a few reasons why ships are abandoned. Indebtedness is one of them. Some are also due to failure to comply with certain port rules and regulations. You know that there are many port regulations regarding unloading what you will do and what not to do in ports.

“And then it all has to do with the type of officers who are responsible for the ships. You know that before the ships arrive the agent has to book and it has to be a reputable agent who can be held accountable to take care of it. If you have a bad agent, the crew will leave it behind. But the most important thing is that these are ships that do not have dignified and reliable port agents. If the agent is worthy of the port, he should be held accountable,” he concluded.

All rights reserved. This material and any other digital content on this website may not be reproduced, published, broadcast, rewritten or redistributed in whole or in part without the prior express written permission of PUNCH.