After Near Death, A Bay Area Chef Has Returned To His Calling: Open-Fire Indian Cooking 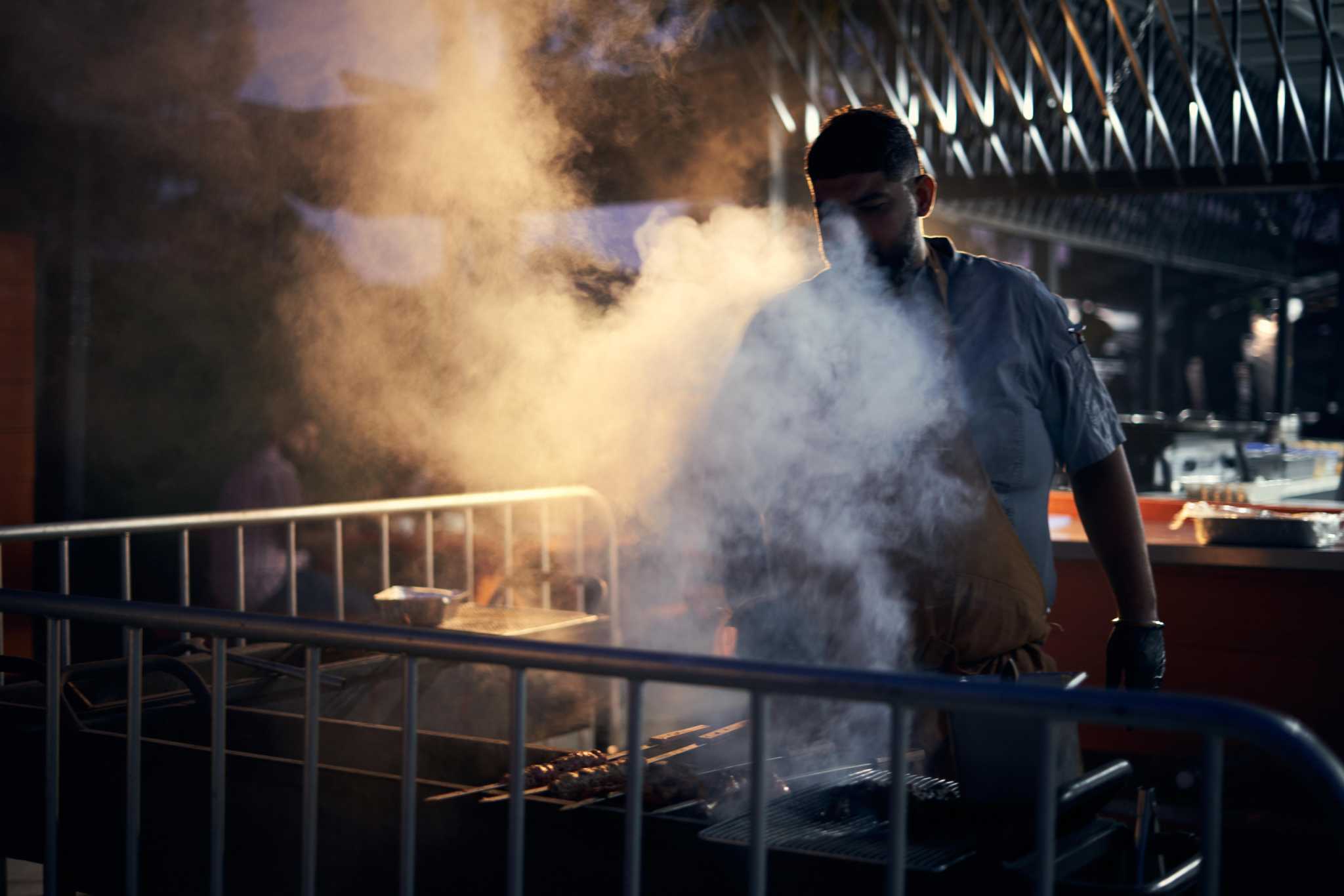 A health scare can put its mortality into perspective, but it also has a way of generating new energy for the life yet to be lived.

Hayward leader Rounak Dumra learned those lessons this year when a stroke nearly took him down.

Since launching his Indian restaurant business and Wah Jee Wah charcoal-grilled kebab pop-up in 2018, he had gained enough momentum to open a restaurant in Hayward in late 2021. But by early 2022, After running the restaurant for just over a month, a blood vessel burst in his brain. At 35, he suffered a stroke. He closed the restaurant and spent four months recovering in India, where medical care is cheaper.

Dumra was devastated. He thought of all the hard work, the long, smoky hours spent planning weddings and events, and the investment he had put into building his business.

But something else happened too. He suddenly felt more focused. The stroke made him more determined. His purpose on earth was not yet complete, he decided.

In July, Wah Jee Wah reopened and the drive Dumra discovered shines through on the plate.

The restaurant specializes in open-fire barbecue, mimicking the street carts of India and the Middle East — a relative rarity among Indian restaurants in the Bay Area. Dumra was born in Kuwait, where his parents owned several restaurants, but his family moved back to India during the 1990 Gulf War. In the late 1990s, at age 11, he came to the Bay Area.

The chicken is marinated in yogurt overnight for the flavor to punch through and ensure a sour, spicy juiciness. The ground lamb skewers are so well spiced that even the mutton avoider in my party really enjoyed them.

My favorite was the subtle, flambé mushrooms, which are as meaty as chicken. You can order them per combo plate ($24), which comes with your choice of two skewers, a side of rice, rich curry sauce, mint chutney, pickled vegetables, and flaky paratha. But my advice is to go with a big hungry party and get the Half Big Boy Platter ($60), a sizable feast for three to four people, that will make you feel like you’re in an episode of “Games of Thrones”. ”.

While barbecue is the main attraction at Wah Jee Wah, there are also more contemporary dishes. One of them is macaroni and cheese masala ($8), and it’s delicious. The addition of a masala sauce revs up the classic dish with dense garam masala spices like cinnamon, cumin and fenugreek, but it’s just as gooey as a typical macaroni. It’s topped with a layer of grilled cheese, like a savory version of the glass barrier on a crème brûlée, adding a little crispy cheese to every spoonful.

Other items didn’t work for me. The lamb lumpia ($9), for example, had great flavor, but I wouldn’t exactly call it a lumpia. A traditional lumpia is smooth with a thin, lively skin, while this wrapper is thick, fluffy and full of bubbly ridges.

The high-profile Indian snacks known as chaat, on the other hand, are exquisite, especially because of the human connection involved. Dumra likes to say that he doesn’t just sell food, he sells an experience, and a lot of the food is prepared right before your eyes.

Witness the golgappe ($7 for six), better known as pani puri, small fried and stuffed pastries. Each is served individually to ensure maximum freshness. The cook will run a finger through the puff and add a seasoned potato, followed by a dollop of sticky tamarind chutney and sour tamarind water. You are advised to consume it immediately – like a glass of alcohol in a bar – because if you wait too long it can lose its crispy properties. The explosive little package tickles the senses with tart, sweet and tangy flavors.

The other standout chaat is the Roasted Peanuts on Papadum ($6). Papadum, a crusty bread made from lentils and other starchy flours, acts as a tostada for peanuts spiced up with spices, lime and green chilies, as well as onions, tomatoes and cilantro. It’s an exhilarating presentation of crunchy textures with a steady boost of acid and a hint of heat.

If you’re not in the mood for kebabs, the Coastal Whole Fish Curry ($30) is wonderful. The fish is fried until crispy, ensuring a flaky skin, and served with a distinctly tangy coastal coconut curry – a tribute to Dumra’s mother, who hails from the coastal region of Goa. (He wouldn’t call it a Goan curry, though, for fear of his mother’s disapproval.) The Sunny Tropical Curry Sauce is a great addition, available a la carte ($6), that brightens up anything she touches everything from fish to skewers to rice.

Before Dumra opened Wah Jee Wah, her father owned and operated a restaurant of the same name in Fremont for 18 years. Like many children of immigrants, Dumra worked in his father’s restaurant as a child, absorbing the lessons of running a business. But instead of taking over when her father was ready to retire, Dumra decided to go to culinary school. He started his restaurant and pop-up business after being inspired by Oakland pop-up chef Edward Wooley, better known as Chef Smelly.

The generational difference between the two Wah Jee Wah is most evident in Dumra’s clean menu. But father and son specialize in the slow, fiery art of barbecuing.

Unsurprisingly, Dumra’s restaurant exists almost entirely outdoors. It shares space with a pizzeria in a white and orange building on a quiet residential neighborhood in South Hayward, a short walk from Union City. All seating is outdoors, and you can order at the window or at a picnic table by scanning a QR code. Part of the kitchen is also outdoors; you can watch a cook flip the paratha and fulfill chaat orders.

Most restaurants are acutely aware of the struggle to survive, but that feeling is palpable at Wah Jee Wah. Although now retired, Dumra’s father comes by sometimes, walking around, checking on customers, peeking at the grill and tilting his head back to eat pani puri.

“One day I wanted to buy a house for my parents,” Dumra says proudly. “That’s what I’m working towards.”

Best Practices: Go with a large group and order half the Big Boy platter to try all the skewers.