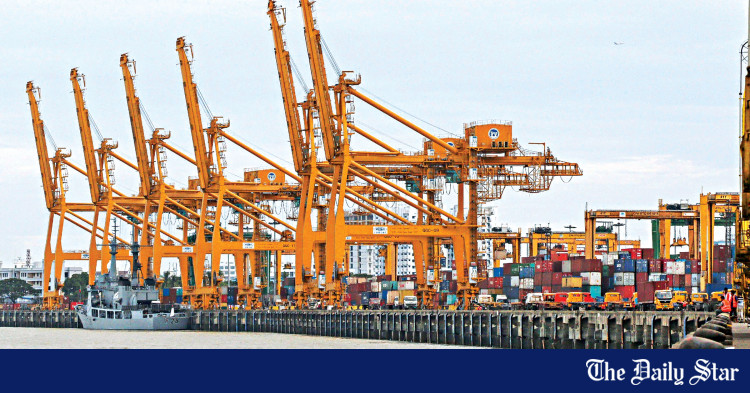 Two more quayside gantries, also known as ship-to-shore cranes, are to be added to the existing ones at Chattogram Port by this week to improve the port’s efficiency in handling containers to and from ships.

It is expected to dock at Pier Number 5 at the new Mooring Container Terminal today, it added.

This consignment is among 104 different types of equipment CPA is procuring under a project involving Tk 914 crore launched in 2020 to accelerate import and export activities in the country’s main seaport.

As part of the project, CPA purchased four quayside gantry cranes, the most needed and efficient container handling equipment, from China’s Shanghai Zhenhua Heavy Industries Company at a cost of Tk 244 crore for the new Mooring container terminal.

With these four, the number of gantry cranes at the port now reaches 18.

In 2005, the port acquired for the first time four gantry cranes which were installed for the handling of containers on two piers of the container terminal in Chittagong.

No new gantry cranes could be purchased until 2017, forcing the port to manage containers on the rest of the piers using the respective ship’s crane.

Port users, including the business community, have long been calling for more gantry cranes to be purchased alongside, especially since the construction of the new Mooring Container Terminal in 2007 to increase container handling capacity.

The CPA bought six quayside gantry cranes in 2018 and the following year bought four more from the same Chinese company at a cost of Tk 344.92 crore and Tk 238.63 crore respectively.

The inclusion of the new gantry cranes will significantly reduce the dwell time of ships on the port’s piers, he said.

At the same time, each of the four piers will be equipped with three quayside gantries.

The remainder of the New Mooring Container Terminal pier, which is dedicated to vessels bound for the Pangaon Inland Container Depot, will have two gantry cranes alongside.

They would now be able to complete the unloading and loading of import and export containers from larger vessels at the New Mooring Container Terminal jetties within 48 hours, whereas it now takes 72 hours to get the job done, he said.

“With three dockside gantry cranes working on a larger ship at once, loaded import containers can be unloaded in 1 to 3 p.m., which now takes 6 to 7 p.m.,” Tanveer said.

CPA Chief Engineer Aminul Islam said so far 16 pieces of equipment have been procured out of a total of 104 under the Equipment Procurement Project.

Under the project, CPA planned to purchase four quayside gantry cranes, 11 rubber-tired gantry cranes, 27 horse-drawn quarries, FOUR stackers, two mobile cranes with a capacity of 100 tons each and others.