A glimpse of a land before its time 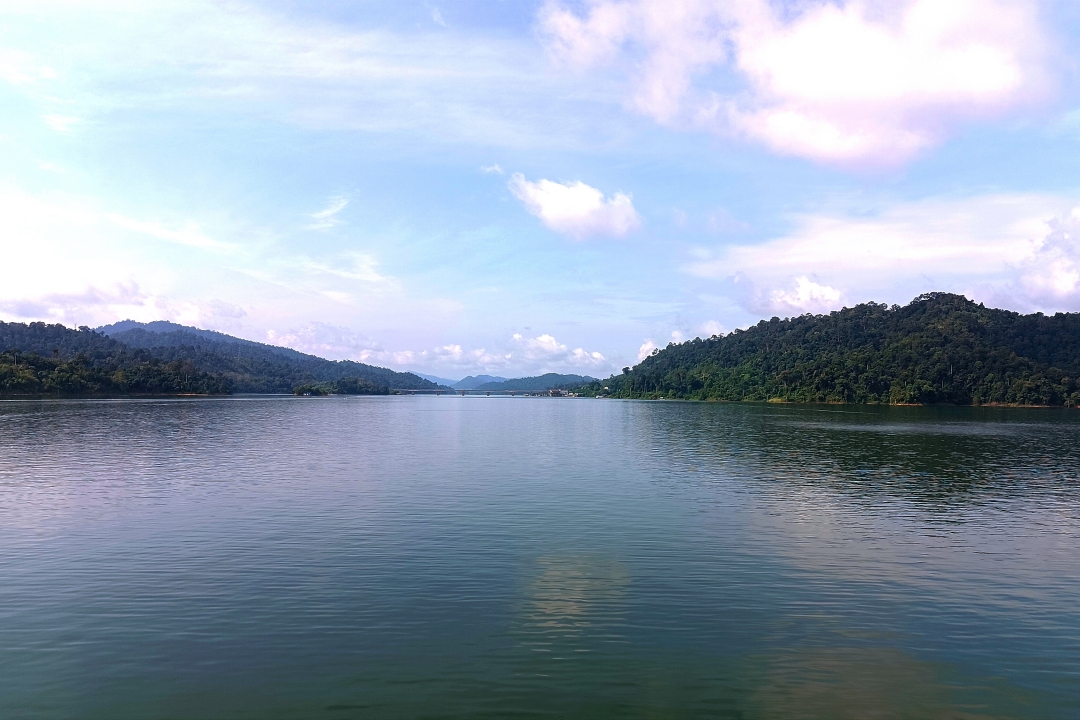 A view of Lake Temenggor, surrounded by ancient rainforests.

At the right time, when the sun casts its beam over Lake Temenggor, it shimmers like a brilliant emerald, bathing almost the entire rainforest of Belum Temenggor in its glorious glow.

Covering an area of ​​around 290,000 hectares – nearly four times the size of Singapore – the Belum Temenggor in Perak has existed for over 130 million years and is known as one of the oldest rainforests in the world, even more older than those along the Amazon and in the Congo.

Divided into two sides, the Upper Belum or The Royal Belum State Park covers 117,500 hectares of land filled with jungles yet to be trodden and stretches to the Thai-Malaysian border; Bas Belum, or the Temenggor Forest Reserve, is mainly covered by Lake Temenggor, which extends over 150 square kilometers.

The vast territory is home to the indigenous Jahai people, who still practice their traditional way of life – living in bamboo huts, hunting animals with blowguns, fishing, as well as gathering plants and honey from the jungle.

They live alongside wild animals, including endangered species such as the Malayan tiger and elephants. 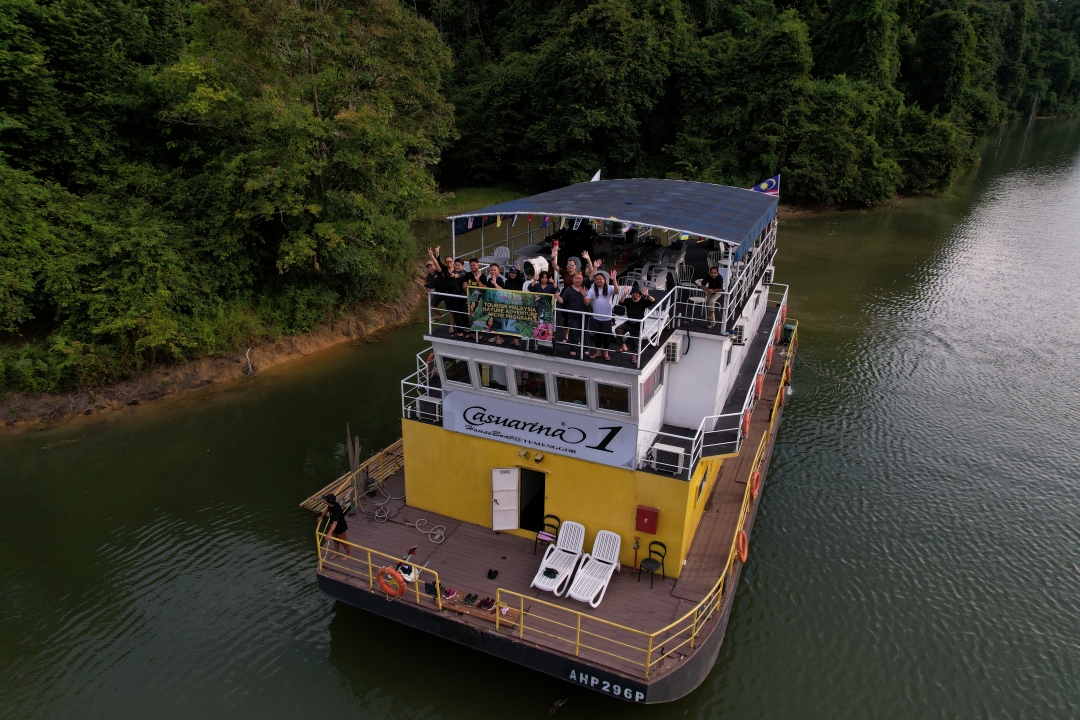 Participants of the Tourism Malaysia program hitting a group pose for the camera aboard the Casuarina.

Tourism Malaysia recently organized a comprehensive five-day tourism program which was attended by members of the press, including thesundaypost, as well as travel agents from Sarawak.

The program has listed trips to places of attraction across Klang, Selangor, Kuala Lumpur, Perak and Penang, in hopes of further promoting intra-state tourism, and also increasing the number of flights serving the areas. Kuching-Penang and Kuching-Kuala Lumpur by raising awareness. of these tourist offers via the media.

Before heading to Royal Belum State Park, we had spent the night at Haji Karim’s Kampungstay in Kuala Kangsar, where we were able to experience a bit of local Malay village life.

We left early in the morning and headed to the public Pulau Banding jetty in Gerik to board a houseboat where we would spend the next two days at Royal Belum State Park and cruising around Lake Temenggor.

Such a trip would require a permit and also a licensed guide, and the only way to enter the park would be through the designated waterways.

Luckily for us, we had a brilliant guide, Hafizi Ramli from the national park management. 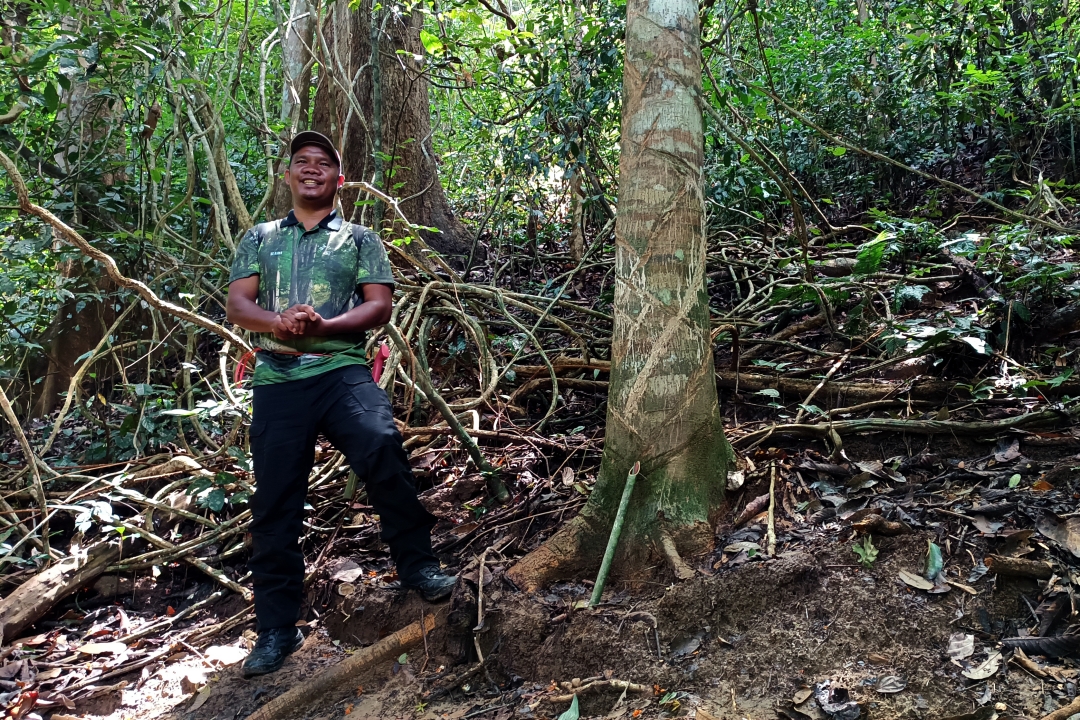 Hadi standing next to the Ipuh tree.

Cruise aboard the barge

The barge was called the “Casuarina” – a fully equipped ship, with a highly trained crew. It could accommodate a maximum of 20 people, all of whom could take advantage of the facilities on board such as the kitchen, a barbecue area, several shared bathrooms, air-conditioned bedrooms, and even a karaoke room for laid-back evenings.

The lake cruise offered a good view of the impenetrable rainforests.

Hafizi said we might be lucky to spot the elusive elephants there.

“If we’re lucky, however, it’s a very rare occurrence,” he said.

From a distance, we could see the village of the Orang Asli (indigenous people), Kampung Sungai Tiang. According to Hafizi, the village has a primary school with only about 20 teachers.

He is informed that there is another village located by the lake, Kampung Kelewang, which is home to about 40 families.

It was very nice to listen to Hafiz talk about all the interesting facts and information about the forests and the park, which he obviously knew a lot about.

“Besides Sabah and Sarawak, Perak also has hornbills,” Hafizi said.

“There are more than 10 types of hornbills in Royal Belum State Park, and they can be seen especially during fruiting season.

“These birds can usually be seen flying through the sky at sunrise and sunset. They are best seen between July and September.

According to Hafizi, Belum Royal State Park was listed by the Malaysian government as a protected area in 2007. 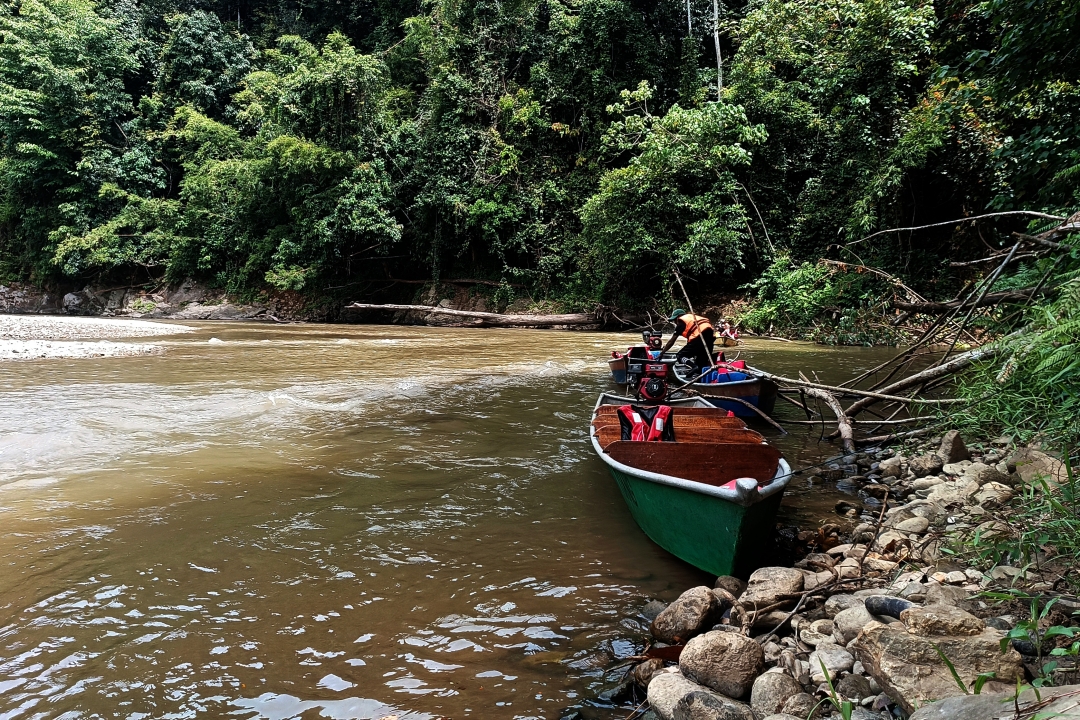 A guide watches over the speedboats by the river, near the starting point of the trek to Akekchep Base Camp.

We then disembarked the ‘Casuarina’ for the next activity, where we took a 40-minute speedboat ride to reach the starting point of an inland trail that would take us to base camp. Akekchep Sungai Tiang.

After about half an hour of walking through the jungle, we were greeted by Hadi Mes, an Orang Asli guide, and his friends.

Hadi told us that we were the first group to take the trail to the base camp they had just cleared.

As we were walking, he showed us the ‘Ipuh’ tree and immediately warned us of its extremely poisonous sap. It is known that the name of the capital of Perak derives from this tree.

“The sap can cause death. We dip our blowpipe darts in it,” he said.

When we arrived at Akekchep, we could see several bamboo and rattan wooden huts, and on the grounds were herbaceous plants such as ‘Kacip Fatimah (Labisia pumila) and ‘Tongkat Ali’ (the ‘Long Jack’, or Eurycoma longifolia). 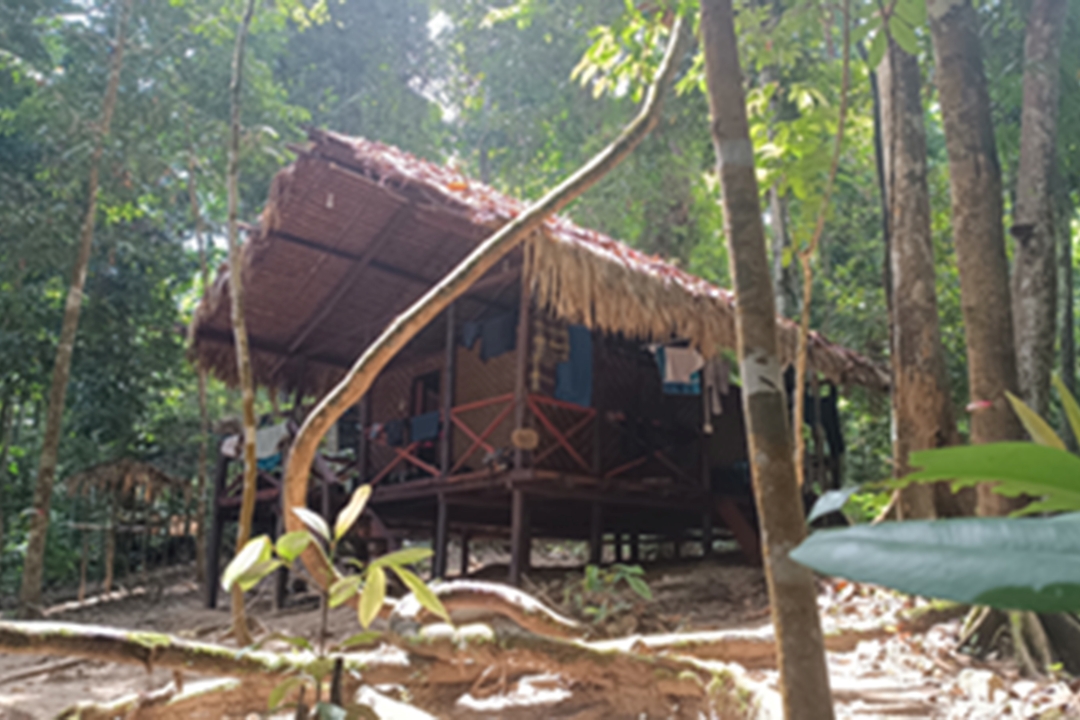 One of the huts at Akekchep base camp, surrounded by herbaceous plants.

The Perak State Parks Corporation (PSPC) introduced the base camp as one of its tourism products and it is managed by the Orang Asli of Kampung Sungai Tiang.

It is also the company’s ongoing initiative to conserve the pristine forests as well as the fish population in the region’s river system.

Asked about the name of the camp, Hadi replied that it means “not to catch” in the Jahai language.

“We also organize other activities like trekking, horse riding, tubing and a visit to the herb gardens.

“These herbs are what the Orang Asli use in daily life,” he said.

The actual fish sanctuary site was about a five minute walk from the camp. 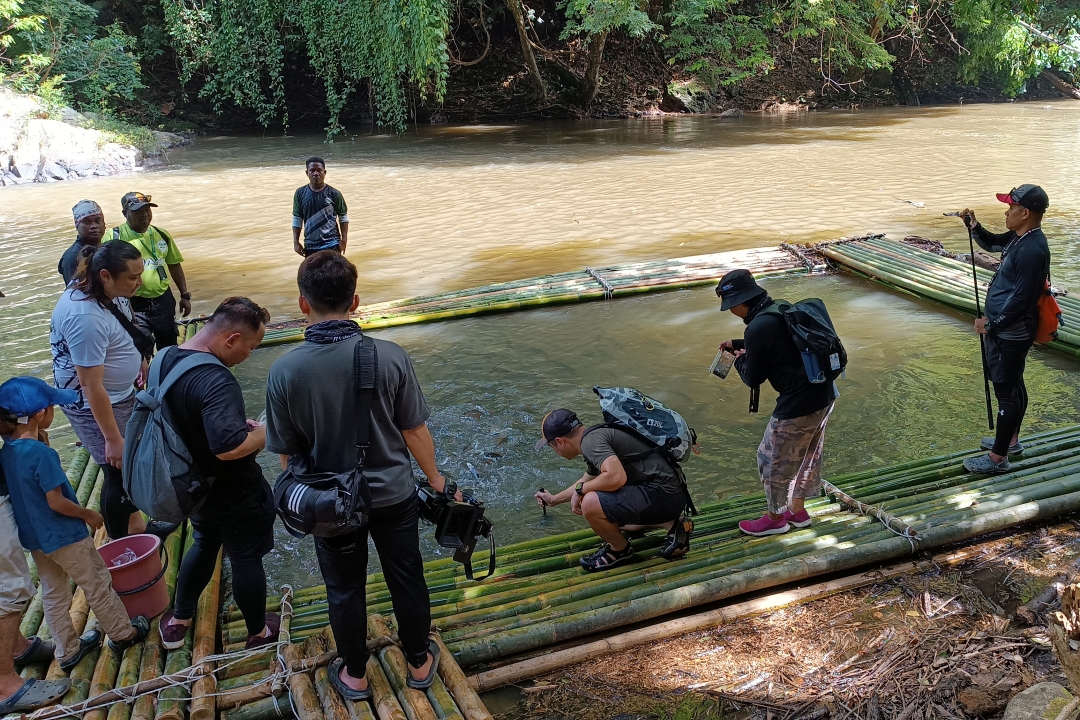 Participants feeding the fish at the Akekchep shrine.

Hadi said fishing was prohibited there, but visitors were allowed to feed the freshwater fish.

“We received a good number of visitors, but they (the Orang Asli) only allowed visitors to Akekchep on Sundays.

“Yes, we want to generate economy, but at the same time we also have to preserve the jungles and the wild animals. It’s a balance – enjoying visitors and protecting the rainforest,” Hadi pointed out.

Our trip to Akekchep ended with a fun activity – tubing.

We all felt like kids again as we spent the entire 30 minutes maneuvering large inflated inner tubes along Sungai Tiang back to the speedboats.

It was an exciting experience, but not without consequences. We were bruised all over, from hitting rocks sticking out of the river while we were tubing, but we all agreed that the pleasure far outweighed the pain! 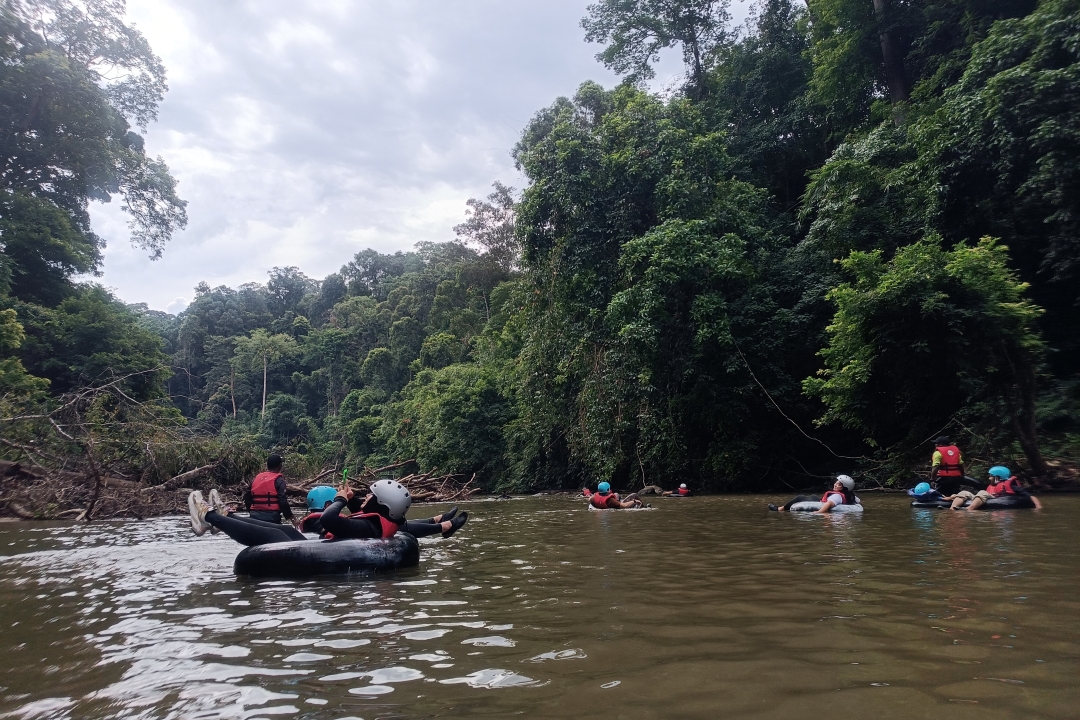 Participants have a blast on the “tubing” activity at Sungai Tiang.

Even after the adventurous, albeit short, trip to base camp, we were still up for more.

Upon reaching the houseboat, we immediately jumped on the bamboo rafts brought from the pier earlier and started exploring the lake. It was exciting and humbling at the same time because from our perspective, the vastness of the lake made everyone and everything near the horizon seem tiny.

Dinner time was eagerly awaited after a full day of activities, and the Casuarina kitchen team provided us with an amazing feast, as well as a BBQ session.

The culinary highlight of the evening was definitely the grilled “toman” (snakehead fish), freshly caught from the lake.

There was no internet connection, but no one seemed to care as we all enjoyed each other’s company in a serene natural outdoor setting.

The whole experience, of witnessing one of the oldest rainforests in the world, as well as meeting and networking with new people, was definitely one that would stick in everyone’s mind.

To learn more about Belum Temenggor and the tour packages it offers, visit https://belum.com.my.