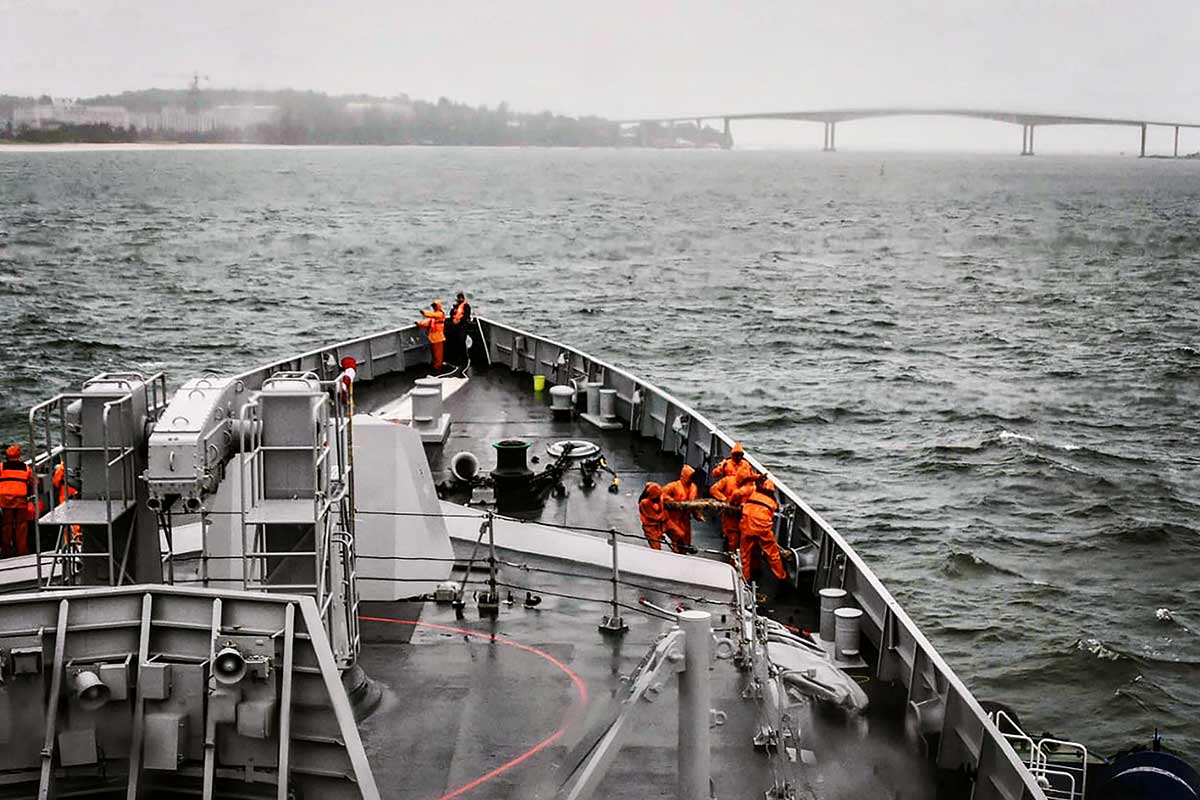 Seven Indians have been held by Houthi rebels since they were captured aboard a hijacked cargo ship crossing the Red Sea in January 2022. But a diplomatic challenge stands in the way of their release.

It was minutes before midnight on January 2, 2022. A cargo ship named Rawabi had left the island of Socotra off the coast of southern Yemen. Flying a flag of the United Arab Emirates, the ship was en route to Jazan in Saudi Arabia. As the ship crossed the Red Sea, along Yemen’s Hodeidah province, it was hijacked. Eleven crew members of the ship were abducted by Houthi rebels, who claimed the ship was carrying weapons and ammunition. Among the 11 crew members were seven Indian citizens who have since been detained by the Houthis, with their location and condition unknown.

Around two hours before the January 2 hijacking, Haryana-based Dimple (name changed) spoke to her husband, a second officer on the ship, on the phone. But it was only two days later that she learned that her husband was one of the 11 sailors captured by the rebels. “My husband went to sea in September 2021. I spoke to him around 10:30 p.m. on January 2, but only learned on January 4, through a mutual friend, that he had been kidnapped.

While the Indian government has repeatedly contacted her, the Dubai-owned company, which owns the cargo ship and employs the 11 sailors, has remained under wraps.

This is not the first time Houthi rebels in Yemen have been accused of hijacking a ship. A Saudi-led coalition has been fighting for nearly seven years to support Yemen’s internationally recognized government against the Iran-backed Houthis. The Saudi-led coalition has accused the Houthis of attacking shipping in the Red Sea, which connects to the Suez Canal and is one of the world’s busiest maritime trade routes. And this time, caught between the geopolitical tensions of two foreign countries, are seven Indians, and four others from different countries around the world.

Now the Saudi coalition has said Rawabi was carrying medical supplies. The official coalition version is that the ship was returning to the Saudi town of Jazan after completing a mission to set up a field hospital on the island of Socotra in southern Yemen.

The Houthis, however, said it was a “military cargo ship with military equipment”. Houthi military spokesman Yahya Saree said the ship had “entered Yemeni waters without permission” and was carrying out “hostile acts”. And so the ship, the goods and the eleven people on board were captured.


Anxious families await the release of their loved ones

On January 8, Houthi rebels allowed Dimple’s husband to make a phone call to his home. “He said he was safe but did not know when they would be released. He said there was no torture and they give them food and treat them as guests, but they are in captivity, they don’t have their phones, documents, etc. Dimple told TNM over the phone. Dimple last heard from her husband on February 9, after a United Nations representative met with the kidnapped crew and told them the release process was underway. “There has been no word since then,” Dimple said.

In Vizag, Lakshmi’s son, Veera Venkata Siva Sai Gireesh, 26, who worked as a tanker on the cargo ship, left the Indian coast for the first time, aboard the Rawabi. The ship is owned by a UAE-based company called Khalid Faraj Shipping Limited, headquartered in Dubai. The sailors and crew of this vessel have been recruited on a contractual basis, as is normally the case, through independent contractors and agents.

“The last time he called from his phone was January 1. We wished each other a happy new year. Six days later, on January 7, he called me from someone else’s phone and hastily told me that they had been detained and their belongings and phones had been seized,” Lakshmi told TNM.

“He has since called twice more from other phone numbers. His father is no more. My daughter and I are alone in this situation. We tried very hard to find the contacts of the agents or shipowners, but we couldn’t,” Lakshmi said.

Manoj Joy, community development manager for the Sailors’ Society, a UK-based maritime charity that supports seafarers and their families, has stayed in touch with Indian seafarers’ families with updates. He says that releasing the crew, in this case, is not as simple as sending evacuation planes, like India sends to Ukraine. “Ukraine has a government. Part of Yemen is under the control of Yemen’s Houthi rebels. There is no government, it is the non-governmental militia which detains the Indians and other nationals. The militia does not maintain diplomatic relations. Who are you going to talk to? Therefore, we have to work with organizations like the United Nations or countries that are friendly to them,” he says.

“One of the crew members is currently being held by rebels, while his wife is in Kyiv, Ukraine taking shelter in a bomb shelter as Russia continues to invade Ukraine. She was supposed to leave the country on February 26, but the airspace was closed,” says Joy. When he spoke to her recently, he could hear loud sounds and commotion on the phone. “Her husband in Yemen begged the rebels to let him talk to her, and he told his wife on the phone to forget about his studies for now and leave Ukraine immediately,” Joy shares.

Neither the union government, nor the state government, nor the company contacted them, Lakshmi said. “Some people from the seafarers’ union were the only ones to contact us and make sure my son would come home. We don’t know what we can do, who to ask for help, who to write to,” adds Lakshmi. “We have no idea which company hired him, we have no numbers to contact people beyond that. We are in a helpless situation,” adds Lakshmi, echoing sentiments other families awaiting the return of their family members.

For two weeks, seven Indian families have been waiting impatiently for their phones to ring. It has been almost two months since the Union External Affairs (MEA) in India provided any official update on the captured Indians. On January 11, the MEA issued an official notification.


What the Indian MEA said

“We are in contact with the company operating the vessel,” the MEA said. “We also understand from the company and other sources that all Indian crew members are safe. The Indian government is making every effort to ensure their early release. We urge the Houthis to ensure safety and the well-being of the crew members and to release them immediately.”

A day later, India raised the issue of the seized cargo with the United Nations. Speaking at the UN Security Council briefing on Yemen, Permanent Representative of India, TS Tirumurti expressed India’s grave concern. “Seven Indian nationals are among the crew on board the ship and we are deeply concerned for their safety and well-being,” Tirumurti said. He urged the Houthis to immediately release the crew members and the vessel, adding that the Houthis also bear the responsibility of ensuring the safety of the crew members until their release.

Yemen, one of the poorest in the Middle East, has been wracked by a civil war since 2014. It started with the takeover of the capital Sanaa by the Iran-backed Houthi rebels, then the north of the country . The internationally recognized government was overthrown and forced to flee south. A Saudi-led military coalition has intervened in the civil war and has been fighting the Houthis since 2015. The war has claimed thousands of lives, displaced millions and led to severe shortages of food and other essentials in Yemen. In 2015, as the situation worsened, the Indian Embassy in Ukraine was moved to Djibouti. The past few months have seen a multiple and deadly escalation in the conflict between Houthi rebels and the Saudi-led coalition, which is trying to drive the Houthis out of the country.

Now a United Nations representative has met with the captured crew to inform them of their release. But since mid-February, most families have not received an update. And it continues, says Joy, seafarers continue to be exploited because they are unaware of the goods they are transporting. In June 2020, four Indians – Shanmukha from Visakhapatnam and Mahesh from Srikakulam in Andhra Pradesh, and two others, Chandan and Krishna – were arrested in Dakar, Senegal, in a drug trafficking case. The four worked on a freighter and the sailors, along with their families, insist they were innocent and unaware of the existence of the drugs, and were just waiting to be paid and sent home.

“Before leaving, seafarers must check the credentials of the company they work for. This capture of the ship can happen to any company. But a good company would have employed security guards or armed guards when transiting through pirate or rebel areas. There are standard procedures when transiting through risk areas. In many cases we find seafarers working with clandestine operators or companies of a shady nature. But in there, you risk your life, you have to be careful…”, he adds.

TNM has contacted the Ministry of External Affairs for an update on whether it will contact Gulf countries that have good relations with Yemen. The response will be added once TNM receives it.

With contributions from Jahnavi Reddy