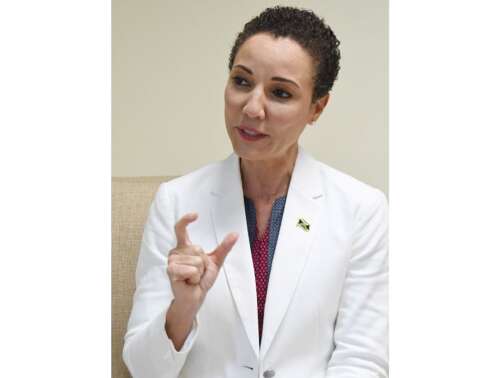 Discussions are currently underway between the Jamaican and Colombian authorities with a view to repatriating the 34 Jamaicans who were allegedly caught fishing illegally in Colombian waters, starting next Saturday.

After raising the issue in the Senate on Friday during her contribution to the State of the Nation debate, the Minister of Foreign Affairs and International Trade, Senator Kamina Johnson Smith, released a statement on Saturday in which she said that the talks were underway. She told the Senate on Friday that Jamaica had made arrangements for the fishermen to return this Saturday, Nov. 4, but Colombian authorities have requested an extension and offered Nov. 12 instead.

The Minister of Foreign Affairs indicated that the Colombian and Jamaican governments will carry out a joint operation to return the crew of the ship to Jamaica, which will result in a meeting between the coast guards of the two countries for the transfer of the crew, to an agreed point. On the high seas.

“We look forward to the safe return of these Jamaican nationals who naturally wish to return home with their families. As a ministry and with our partners, the Ministry of Agriculture and the JDF[Jamaica Defence Force]we will continue to work towards that goal,” Johnson Smith said.[JamaicaDefenceForce)wewillcontinuetoworktowardsthisgoal”saidJohnsonSmith[JamaicaDefenceForce)wewillcontinuetoworktowardsthisgoal”saidJohnsonSmith

She revealed that on October 19, her ministry was informed by the JDF that a Jamaican fishing vessel, registered as Hope-On, had been detained in Colombian waters by Colombian authorities.

Johnson Smith said that on October 20, the department requested assistance from the Jamaican Embassy in Bogota to verify details of the incident, begin the required verification of the Jamaican nationality of the crew and determine their needs. . She said the Colombian reported that 6,430 kilograms of parrotfish were found in the vessel and a total of 41 people were on board.

The Minister added that on November 2, the Passport, Immigration and Citizenship Agency completed the verification process, indicating that 34 of the people on board the ship were Jamaican, one Honduran and six nationals of the Republic. Dominican.

“The owner, who operates a commercial fishing business, indicated that he was looking after the needs of the crew who were not in prison, but who lived on the vessel. He also indicated that he had retained the services of a lawyer in Colombia and hoped to obtain arrangements for the vessel to be released and the crew to bring it back to Jamaica,” Johnson Smith said.

Aware of the risks and concerned for the well-being of Jamaican nationals, Johnson Smith said his ministry had asked Colombian authorities if such a process could be facilitated.

However, it was confirmed that the vessel had been seized and would be sold in accordance with Colombian law, and that although the captain would be detained to face charges in Colombia, they would keep the offer open to transport the remaining members of the the crew to a point agreed with the JDF.

On Friday, the minister called on fishermen to operate responsibly. She said that “owners and fishers need to recognize that times have changed and countries have changed their laws. Illegal fishing is a major international problem. Ships are seized and the crew is likely to be imprisoned. We are grateful that in this case the entire crew was not detained,” she said.

She added that “owners, operators and anglers must fish responsibly in Jamaican waters. Boat owners must also insure their vessels, not only against damage, but also against loss and seizure, and for the care and protection of their crew.”